Who's Coming to the State of the Union? 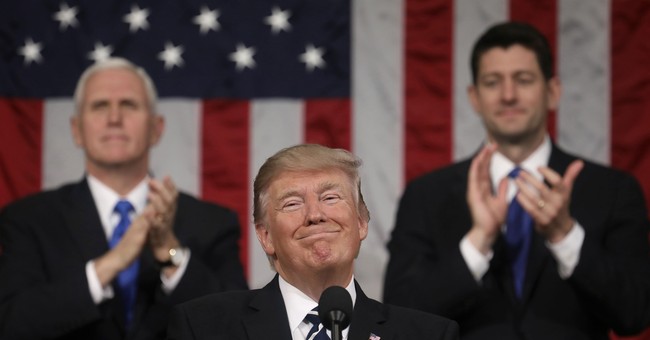 Trump’s State of the Union address tonight is expected to push a message of national unity and reconciliation, and his official guest list comprising military members, law enforcement, first responders, parents of victims of immigrant gang violence, and business owners appears to be geared towards highlighting these themes. In contrast, congressional Democrats are determined to use the occasion to promote their partisan talking points, especially their demands for a “clean” DACA amnesty bill.

Many more Democrats will be present at the State of the Union, but like Rep. Blumenauer, they will be bringing guests who reinforce their stance as a pro-illegal immigration party. At least 24 Democratic legislators, including House Minority Leader Nancy Pelosi, Minority Whip Steny Hoyer, Rep. Luis Gutierrez, and Sens. Kamala Harris and Ron Wyden, have invited DACA recipients or self-identified "Dreamers" to the Capitol.

Other Democrats are bringing guests who are facing deportation (or their relatives) or family members of people who have already been deported. New York Rep. Nydia Velazquez has chosen Amy Gotlieb, wife of convicted wire fraudster and immigration activist Ravi Ragbir, who has himself been slated for deportation since 2006, as her official guest. Democrats have portrayed Ragbir as a victim of ICE officials supposedly going after Trump’s political opponents.

However, Democrats are not wholly focused on promoting amnesty for illegal immigrants tonight.

According to ABC News, ten legislators are bringing feminist activists and sexual assault accusers to promote the #MeToo movement, ostensibly to smear Trump by implication as a sexual abuser and indirectly draw attention to allegations of sexual misconduct against him. Rep. Joe Kennedy, who will give the official Democratic response to Trump’s speech, has chosen to highlight gender politics with his guest—Army Staff Sergeant Patricia King—who is transgender. King would have been ejected from military service by Trump’s decision last year to ban transgender individuals from the armed forces.

Democrat Randy Bryce, Rep. Mark Pocan’s official guest, will be at the State of the Union not to attack Trump, but to set up a campaign attack ad against his electoral opponent—Speaker of the House Paul Ryan. As Bryce explained to Politico:

“They’re working together, and the fact that they’re going to be standing so close to each other — Paul Ryan is literally going to have Donald Trump’s back — which is pretty much the way it’s been going for this past year,” said Bryce, who’s running against Ryan for his House seat back in Wisconsin.

The appearance will be paired with a new ad Bryce will air during the coverage of the speech on MSNBC attacking Ryan for working with Trump on the tax bill.

Some Democrats have chosen to invite Puerto Ricans as SOTU guests to draw attention to what they view as the Trump administration’s incompetent and racist response to the devastation caused by Hurricane Maria last year. Among them is New York Sen. Kirsten Gillibrand, who has decided to bring San Juan Mayor Carmen Yulín Cruz as her official guest. In the aftermath of Maria, while initial federal and local efforts were being launched to ameliorate the crisis, Mayor Cruz was an ever-present mouthpiece for liberal media outlets that repeatedly hosted her rants against Trump. At the time, Cruz suggested that the Trump administration was deliberately stalling aid efforts to the Caribbean island in an attempt to cause mass death from starvation and thirst. More disturbingly, Mayor Cruz is also a well-known supporter of Puerto Rican separatists and convicted terrorists from the FALN, including Oscar López Rivera.

President Donald J. Trump and First Lady Melania Trump are pleased to announce that the following individuals will be their special guests, seated with the First Lady, at the President’s first State of the Union address:

Corey Adams: Corey Adams is a skilled welder at Staub Manufacturing Solutions in Dayton, Ohio, where he has worked for more than eight years. During 2017, Corey and his wife were able to become first-time homeowners, and they will invest their extra money from tax reform into their two daughters’ education savings.

Elizabeth Alvarado, Robert Mickens, Evelyn Rodriguez, and Freddy Cuevas: Elizabeth Alvarado and Robert Mickens are the parents of Nisa Mickens. Evelyn Rodriguez and Freddy Cuevas are the parents of Kayla Cuevas. Nisa and Kayla had been close friends since elementary school, but in September 2016, the two girls were chased down and brutally murdered. Their deaths were among a string of 17 Long Island slayings that have been attributed to Mara Salvatrucha, also known as MS-13.

Corporal (Ret.) Matthew Bradford: Matthew Bradford joined the United States Marine Corps straight out of high school and deployed to Iraq in 2006. In 2007, he stepped on an improvised explosive device (IED). Shrapnel shot into both of his eyes, blinding him, and the explosion also took both of his legs. After multiple surgeries and therapy, Matthew reenlisted in the Marine Corps—the first blind, double amputee to do so.

Jon Bridgers: Jon Bridgers founded the Cajun Navy 2016, as a non-profit rescue and recovery organization to respond to flooding in south Louisiana. In 2017, the Cajun Navy set out to provide aid to those in Texas affected by Hurricane Harvey. He and the Cajun Navy 2016 have helped thousands of people across the South, and to this day, they are helping collect resources and donations for those who lost their homes in the storms.

David Dahlberg: David Dahlberg works as a fire prevention technician in southern California, stationed at the Pine Canyon Fire Station in the Santa Lucia Ranger District. In July 2017, he saved 62 children and staff members from a raging wildfire that had encircled their camp.

Officer Ryan Holets: Ryan Holets serves as a police officer in Albuquerque, New Mexico. In his six years on the force, he has been shot at twice and experienced several near-death encounters. Officer Holets and his wife adopted a baby from parents who suffered from opioid addiction, breaking down walls between drug addicts and police officers to help save lives.

Ashlee Leppert: Ashlee Leppert has dedicated her life to her country, serving as an aviation electronics technician in the United States Coast Guard. Last year, she rescued dozens of Americans imperiled during the devastating hurricane season. Nothing has left more of a mark on Ashlee than her efforts to lift a woman to safety in a helicopter basket. The woman was clutching a few bags of what Ashlee thought were clothes. As she drew the woman near, however, Ashlee saw four sets of children’s eyes looking at her as their guardian angel.

Agent Celestino “CJ” Martinez: CJ Martinez is a Supervisory Special Agent for the United States Immigration and Customs Enforcement’s Homeland Security Investigations unit. He has spent much of his 15-year tenure working to dismantle transnational criminal organizations, including MS-13. His investigations have led to more than 100 arrests of MS-13 gang members who have been prosecuted for crimes, including homicide, assault, and narcotics and weapons trafficking. CJ is a proud veteran, having honorably served our Nation in the United States Air Force and Air National Guard for more than 22 years.

Staff Sergeant Justin Peck: Staff Sergeant Justin Peck has served in the United States Army for eight years. In November 2017, he was part of a team, along with Chief Petty Officer Kenton Stacy, that was conducting a multi-day mission with partner forces in Raqqa, Syria, to clear IEDs from territory previously controlled by ISIS. After the team had located and disarmed seven IEDs, Chief Petty Officer Stacy was clearing the second floor of a hospital building when he was struck by an IED blast and severely wounded. Without hesitation, Staff Sergeant Peck, who was holding a position outside the building, rushed to Stacy’s location on the uncleared, IED-ridden second floor. Staff Sergeant Peck’s actions—including applying a tourniquet, placing an endotracheal tube, and performing artificial respirations and CPR—were directly responsible for saving Chief Petty Officer Stacy’s life.

Preston Sharp: Preston Sharp was visiting his veteran grandfather’s grave in 2015, when he noticed that other local veterans’ graves were not being honored with American flags or flowers. Today, Preston has organized the placement of more than 40,000 American flags and red carnations on soldiers’ graves, as part of his goal to honor veterans in all 50 States and to challenge others to join the Flag and Flower Challenge (#FandFChallenge).

Steve Staub and Sandy Keplinger: Siblings Steve Staub and Sandy Kepingler started Staub Manufacturing Solutions, a contract manufacturing company specializing in metal fabrication, twenty years ago.  Today, they serve as president and vice president, respectively. Thanks to the “Trump bump” in their business, Staub Manufacturing Solutions has seen an uptick in sales, employment, and optimism. They have grown their team from 23 to 37 employees over the last year and recently expanded by acquiring a new building. Following enactment of the tax cuts and reform legislation last year, they were able to give all their employees larger than expected Christmas bonuses.

Why the Masked and the Unmasked Have Disdain for Each Other
Townhall
Gov. DeSantis slams the Biden administration over the FDA's new edict on monoclonal antibodies
Twitchy
Peter Doocy Has Appropriate Response to Biden Attack as Other ‘Reporters’ Show True Colors
Redstate
The Morning Briefing: GOP Dreams of Election Victory Revenge-Porn Are a Bit Premature
PJ Media