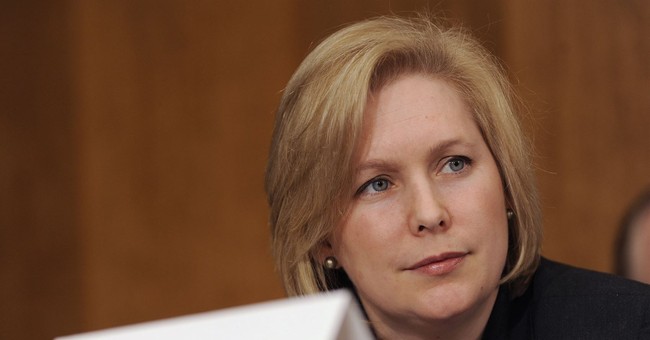 You've heard that some Democrats are boycotting President Trump's first State of the Union, just as they did his inauguration. They can't stand the sight of him apparently, which speaks well to how smoothly Washington is running.

Other Democrats are at least showing up, but their guests are clearly intended to ruffles Trump's feathers when he's at the podium.

When Sen. Kirsten Gillibrand (D-NY) arrives in the chamber, San Juan Mayor Carmen Yulín Cruz will be right by her side.

Cruz infamously sparred with Trump in the aftermath of the devastating hurricanes that hammered Puerto Rico last summer. Wearing a shirt that read, "Nasty Woman" in reference to Trump's comment about Hillary Clinton during the 2016 presidential election, Cruz told media that the president was not doing enough to address the crisis. At one point she called him a "hater-in-chief," while Trump accused her of "poor leadership."

Gillibrand doesn't mind the controversy Cruz will undoubtedly cause.

It is an honor to announce that Mayor @CarmenYulinCruz of San Juan, Puerto Rico will join me at the #SOTU. Throughout the crisis in Puerto Rico, Mayor Cruz has shown extraordinary leadership and fearless advocacy for her city.

Other Democrats are bringing similarly controversial guests. Rep. Joe Kennedy (D-MA), who is giving the Democratic response to Trump's speech, is bringing a transgender soldier, Army Staff Sgt. Patricia King, with him to the address. Her presence will bring more attention to the administration's decision in July to ban transgender individuals from military service.

Other Democrats will be prodding Trump on immigration reform with guests who identify as Dreamers - illegal immigrants who were brought to the U.S. as minors. Their presence will cause a stir as the deadline for the Deferred Action for Childhood Arrivals program fast approaches.

The "Dreamers" in the gallery include aspiring nurse Karen Bahena of San Diego and Virginia high school student Nicolle Uria, who was brought into the United States as a 1-year-old. Bahena is the guest of Rep. Scott Peters, D-Calif. Uria is the guest of Rep. Gerry Connolly, D-Va. (Chicago Tribune)

Two parties can play at this game of musical chairs. Rep. Sean Duffy (R-WI) was happy to give his extra seat to Army Vet Ricky Taylor. When Rep. Maxine Waters (D-CA) said she'd be skipping Trump's address because he's a "despicable" human, Taylor spoke up on Twitter that he'd be happy to take her seat. Thousands of retweets and an appearance on Fox News earned him the honor.