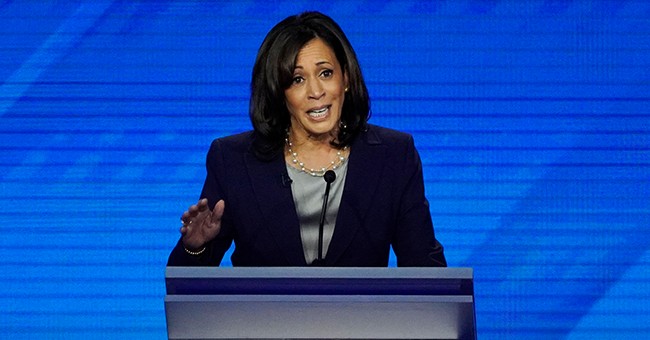 Senator Kamala Harris, seemingly out of her brief depression, bounced back on Friday to her normal vituperative authoritative self. Friday afternoon the former prosecutor who one time bragged about jailing the parents of truant kids told CNN's Jake Tapper that she is not concerned about free speech ramifications in her latest attempt to earn relevancy in the polls by asking Twitter CEO Jack Dorsey to remove President Donald J. Trump from Twitter.

As we covered this week, Harris officially sent Twitter a letter demanding that President Trump be removed from the site due to what she says are tweets tantamount to inciting violence. Befuddled as to how a presidential candidate running to lead the nation where free speech is one of our most cherished rights could advocate the silencing of political speech, Tapper asked Harris to explain herself.

"I know you wrote to Twitter and the CEO Jack Dorsey and asked him to take away the president’s Twitter handle, his account," Tapper said Friday afternoon.

"How is that not a violation of free speech? I mean, the president has the same rights that you have, that I have, and how would that not just be a slippery slope where they have to ban -- you know, half of the people on Twitter?" the host asked.

But Harris responded by insisting that Trump's Twitter is a privilege, not a right.

"I’ve heard that argument, but here’s the thing Jake," Harris said dismissively. "First of all, a corporation -- which is what Twitter is, does not have the -- it has obligations, and in this case Twitter has terms of use policy. And their terms of use dictate who receives the privilege of speaking on that platform and who does not."

"And Donald Trump has clearly violated the terms of use, and there should be a consequence for that.  Not to mention the fact that he has used his platform, being the president of the United States in a way that has been about inciting fear and potentially inciting harm against a witness to what might be a crime against our country and our democracy," she continued.

"And for that reason I do believe that he is -- that it’s clear that he has violated the terms of use, and I’m asking that Twitter does what it has done in previous occasions, which is to revoke someone’s privilege because they have not -- they’ve not lived up to the advantages of the privilege," Harris remarked.

As we reported, Harris's press secretary this week said "free speech" is simply a Fox News talking point after fellow 2020 Democratic candidate Tulsi Gabbard told media she disagreed with Harris's argument. This statement was made before the all-but-confirmed frontrunner Sen. Elizabeth Warren made the same comments in disagreement with the California presidential hopeful.