Is This The Moment That Kamala Harris Realized She'll Never Be President? 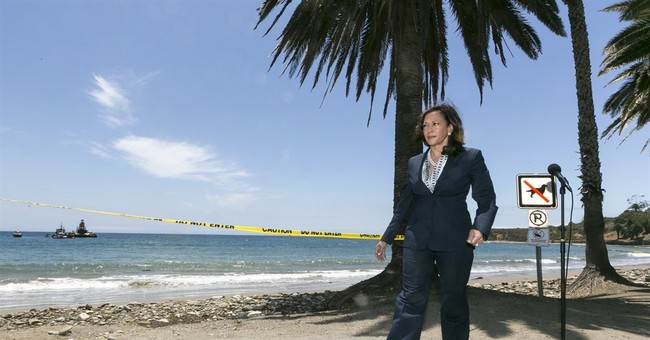 Senator Kamala Harris of California is running for president, but lately on the campaign trail she has seemed pretty hopeless. In July, I wrote an article titled, "It's Hard To Have A Conversation With Kamala Harris When She Doesn't Even Know What She's Talking About." I mentioned that Harris always says, "That's definitely a conversation I'd like to have," or some variation of it right before completely not answering whatever question she was asked by reporters and supporters. I pondered that perhaps this was not a political tactic done simply to flounder out of a controversial debate, but a genuine plea for help. Yesterday, I noted that she has recently been acting out on the campaign trail, desperately doing whatever she can to remain relevant in the polls. "Her latest cry for help is writing to Twitter CEO founder Jack Dorsey in an attempt to get the president of the United States banned from the social media site," I noted. Of course, he won't be removed  from Twitter but Harris got the attention she needed. All of these observances were said mockingly, but perhaps I was onto something. Thanks to the folks over at RNC research, we now have a clip of Harris lamenting the fact that her teachers growing up told her that she was special and that she could be president. Based on this video, it sounds as if the 2020 hopeful now understands she will never be president.

"But we all have a similar story right? Of some teacher along the way that convinced us we were special? We weren't particularly special. But they told us we were and we believed them! We were put on this path to being here together, talking about who's going to be the next president of the United States..." Harris says despondently.

"So it's, it is truly..it's all about our education system and our teachers..."Harris went on to stay while snapping back to reality.

Kamala Harris now realizes she was lied to when teachers told her she was specialhttps://t.co/r2UHn9Ao13 pic.twitter.com/QrErGc9wCu

Ouch. You can hear her hopes and dreams die as she speaks to the crowd. That is great for all of us, because it means she will not be able to enforce her nightmare vision for the country, but talk about depressing if you are Sen. Harris.

If that was not the moment where Harris realized she will never be president then perhaps this next scene was. Trying to get the crowd revved up, Harris asked if America was "ready" for her presidency. The crowd responded, "No!"

Harris asks if America is ready for her presidency: crowd shouts out “no”https://t.co/bnnxZeBS1F pic.twitter.com/reLfvYGacZ

Sorry, Senator. No White House for you!