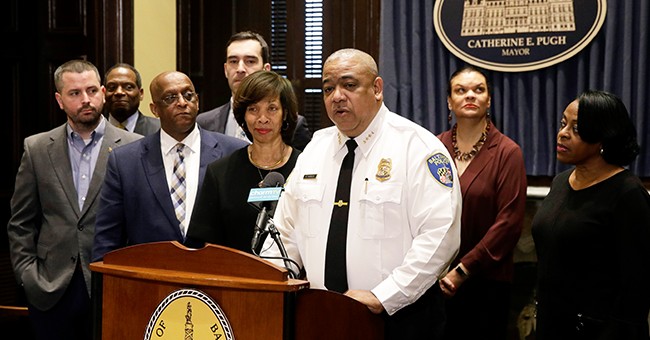 Baltimore Police Commissioner Michael Harrison told media that "an initial investigation revealed that the 43-year-old Carrington was standing in front of his lawn, speaking with a neighbor, when an unknown vehicle believed to be an Acura, pulled onto the street."

Then, a masked gunman hopped out of the vehicle and demanded property. The neighbor threw down his personal belongings and ran. Witnesses say that Carrington, who was not in uniform, attempted to subdue the assailants but he was overpowered.

Bystanders called the cops, and luckily nearby units were able to rush Carrington to the ICU via ambulance.

"The first lady and I are praying for a safe and full recovery for the Baltimore police sergeant who was shot in the line of duty today, and ask that you please join us in keeping this brave officer in your prayers," Maryland Governor Larry Hogan said.

Baltimore Mayor Jack Young noted that Carrington chose to live in the community that he served.

"We need the community's support, we need their help. Broad daylight shootings and murders in the city of Baltimore is totally unacceptable, and we want those who are responsible to be caught and those who know who they are to make sure that they turn them in," Young added. "We can do better Baltimore, and I'm counting on you to do better."