Ouch. Study Shows The Electric Scooter Trend Isn't That Great For the Environment. 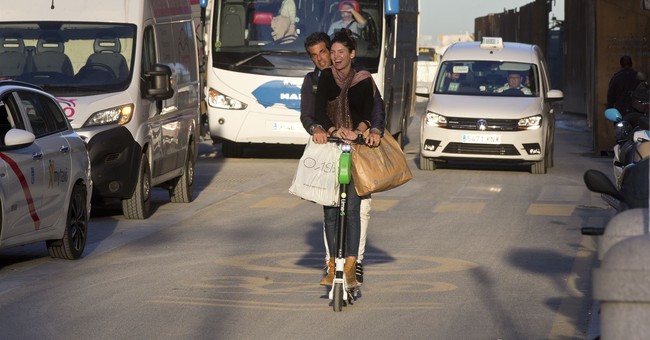 If you've been in a city recently, you've probably seen people whizzing by on all kinds of electric scooters. These vehicles are strewn across sidewalks, parked outside office spaces, and seem to be the hottest form of transportation. Typically riders rent the scooters via apps from companies like Bird, Lyft, and Uber. Many who take them do so out of convenience but also believe they are more environmentally friendly versus a car a city or bus. However, a new report shows that these scooters are actually not that great for the planet.

But, Axios reports that "Electric scooters are often worse for climate change when compared to the transportation methods they’re displacing, according to what is likely the first-ever peer-reviewed study on the new trend."

Specifically, "results show that dockless e-scooters consistently result in higher life cycle global warming impacts relative to the use of a bus with high ridership, an electric bicycle, or a bicycle per passenger-mile traveled. However, choosing an e-scooter over driving a personal automobile with a fuel efficiency of 26 miles per gallon results in a near-universal decrease in global warming impacts."

The same report finds that about half the riders say they would have walked if the scooter was not there. This means  that "e-scooters are the less climate-friendly option about two-thirds of the time."

"While e-scooters may be an effective solution to urban congestion and last-mile problem, they do not necessarily reduce environmental impacts from the transportation system," the report notes.  This is because the scooters are picked up individuals via cars who then charge the scooters overnight.

On average, they found scooters cause 202 grams of climate pollution per mile. Because early models tended to last less than a year, their production made up half of their life-cycle impact. Daily collection for charging and redistribution with mostly gasoline-powered vehicles made up another 43%.

“While the scooters themselves don’t have tailpipes,” one researcher said, “the cars that were picking them up largely did.”

The report says that while the scooters may be changing the way we think about transportation, the new devices still have a long way to go before they are friendly for the environment.