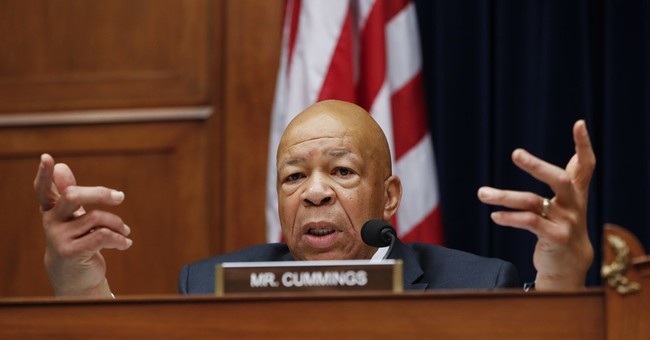 Welp, this is awkward for the Democrats and the mainstream media. Leftists spent the past four days maligning President Donald J. Trump as a racist for using the term "infested" in a litany of tweets against Rep. Elijah Cummings. Rep. Cummings represents parts of Baltimore County, including the city of Baltimore. His district has a massive rat population, drug problem, and a murder rate higher than some of the worst countries in Latin America. But, the media has spent virtually no time at all covering any of those facts. Instead, they insisted that Trump must be a bigot to attack Rep. Cummings and Baltimore.  The only problem for these folks is newly unearthed video reveals that Rep. Cummings said pretty much the exact same thing about his district in 1999.

"I left my Baltimore a drug-infested area," he said in a Congressional hearing. He then said these drugs kill children and turn them into zombies.

Yet, in the left's desire to defeat President Trump at all costs, they ignore the reality that Baltimore's own elected leaders have been calling the place a dump for decades. As Matt covered Monday, even the city's former mayor said she could smell the rats and wanted to "take all this sh*t down"  in reference to dilapidated houses.

"What the hell? We should just take all this shit down.”

"Whoa, you can smell the rats." pic.twitter.com/BqhsL2Dsx7

But, maybe now that Rep. Cummings is in his own words describing that Baltimore is a "drug-infested" place, the media will quit calling the president racist. If these journalists had any standards, they'd ask Rep. Cummings why nothing in Charm City has changed since 1999.