Two Active-Duty Marines Arrested After Sneaking Illegal Aliens Into US 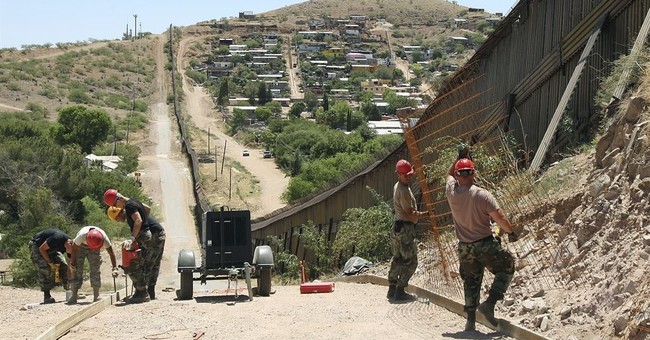 The Washington Post reports that two active-duty Marines were charged on Monday with attempting to smuggle three illegal aliens into the United States for financial gain.

According to Meagan Flynn, Lance Cpls. Byron Darnell Law II and David Javier Salazar-Quintero, from Camp Pendleton, California "fell under suspicion on July 3 after a Border Patrol agent saw a black vehicle momentarily park in the dirt median of Interstate 8 near Jacumba Hot Springs, Calif. Then, he spotted footprints in the dirt seeming to lead toward the car, according to a federal complaint. He thought the footprints might belong to migrants."

The agent then radioed his colleagues to be on the lookout for the car. Moments later a Border Patrol official pulled over Law and Salazar-Quintero. "The three men in the back seat, each from Mexico, admitted they were in the country illegally," Flynn reports.

Based on Washington Post's description, if the facts are true, it seems these two individuals who attempted to smuggle illegal aliens should be called Dumb and Dumber. Both men blamed each other for their crime and neither had a very good explanation.

Law said it was Salazar-Quintero who offered him the job of picking up undocumented immigrants. Salazar-Quintero told agents that Law was the one who introduced him to the world of smuggling jobs, saying he met the “recruiter” through Law

On July 2, Law said Salazar-Quintero called to ask if he’d like to make $1,000 to pick up an undocumented immigrant along Interstate 8 and drop him off at a McDonald’s parking lot in Del Mar, Calif. Law said he agreed. To find the immigrant, Salazar-Quintero took directions from a man in Mexico, since he spoke Spanish, and located him on the shoulder, the complaint says. They finished the job, but didn’t get paid for it.

So they set out for another job the next day, Law said, and this time Salazar-Quintero said his contact promised they would be paid.

The three illegal aliens admitted they were going to pay $8,000 once over the border, but it was unclear who exactly would receive that money.

Proper authorities have been notified of the Marines' arrest. "We are aware of the charges facing Lance Cpl. Law and Lance Cpl. Salazar-Quintero, and we continue to cooperate fully with the investigative efforts into this matter,” Marine spokesman 1st Lt. Cameron Edinburgh said in a statement.