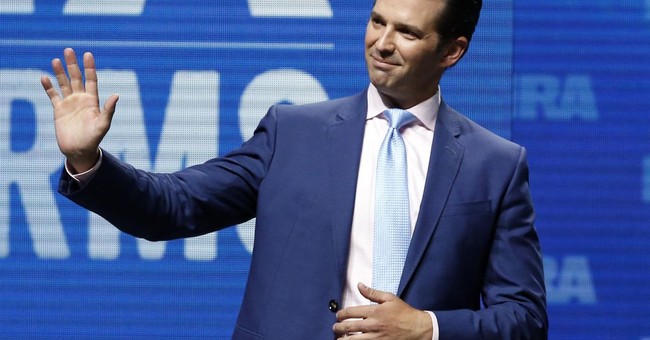 The Washington Post reports that Donald Trump Jr. will testify tomorrow before the Senate Intelligence Committee in Washington, DC as part of his deal he made with the Senate after the panel issued a subpoena for his testimony relating to various aspects of Robert Mueller's special counsel probe into Russian interference in the 2016 election.

This is now Don Jr.'s second appearance before the committee and it "is expected to spend about four hours with the committee answering a limited number of questions, according to people familiar with the terms — including queries about a June 2016 meeting at Trump Tower with a Russian lawyer promising incriminating information about Hillary Clinton."

As noted by WaPo, Trump Jr. is "one of several witnesses that the Senate Intelligence Committee is bringing back to its chambers for a second interview aimed at giving members an opportunity to engage with key figures in the investigation before they will be asked to sign off on the panel’s final report."

When Don Jr. was first subpoenaed, the president was "surprised" that his son was even being called in at all. "My son is a good person. My son testified for hours and hours. My son was totally exonerated by Mueller, who, frankly, does not like Donald Trump, me, this Donald Trump,” the president said at the time.

“And frankly, for my son, after being exonerated to now get a subpoena, to go again and speak again, after close to 20 hours of telling everybody that would listen about a nothing meeting? Yeah, I’m pretty surprised. I’m just really surprised,” he added.

Democrats are particularly interested in whether or not Don Jr. lied to Congress about contact and information with the resident's former attorney, Michael Cohen. Cohen is currently serving a three years jail sentence for financial illegalities and lying to Congress.

Don Jr. has previously called the Mueller investigation the "greatest farce ever perpetrated on our democracy. It’s a disgrace and it’s a stain on our Constitution."