Poll: Majority of Likely US Voters Don't Want To Live In Sanctuary Cities 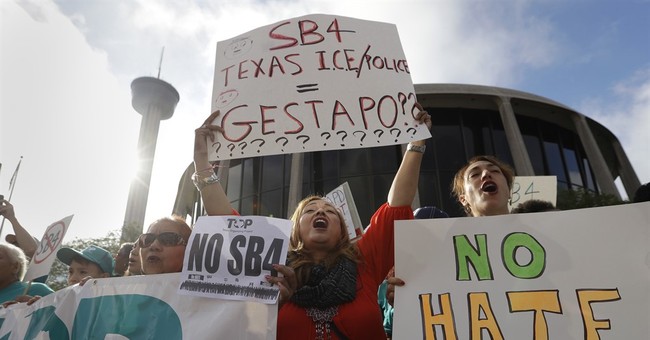 A recent Rasmussen poll found that a majority of Likely US Voters oppose the idea of living in a sanctuary city with the plurality of those polled believing sanctuary cities to be less safe.

The poll was taken April 18 - April 21 and surveyed 1,000 Likely Voters via telephone and online surveys. The findings report that "just over half (51%) don’t want to live in a sanctuary community that refuses to cooperate with federal immigration authorities. Thirteen percent (13%) are not sure."

When broken down along party lines, "Fifty-seven percent (57%) of Democrats favor the community they live in declaring itself a sanctuary for illegal immigrants. Seventy-five percent (75%) of Republicans and 54% of voters not affiliated with either major party oppose living in a sanctuary community."

These results are relatively unchanged since Rasmussen started asking the question two years ago. The poll also found that just 31% of those polled opposed President Trump's idea of sending illegal immigrants to sanctuary cities.

In terms of safety, "Forty-one percent (41%) believe sanctuary cities are less safe than communities that do not protect illegal immigrants from federal authorities. Only 13% say they are more safe, while 36% think the level of safety is about the same as it is elsewhere."

These numbers come after earlier in the month President Trump told law enforcement officials that those seeking to come to the United States that, "Whether it’s asylum, whether it’s anything you want, it’s illegal immigration, can’t take you anymore. Our country is full, our area is full, the sector is full, can’t take you anymore. I’m sorry, can’t happen, so turn around -- that’s the way it is."