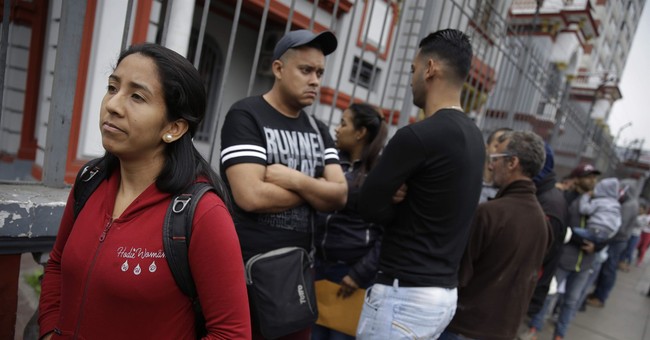 Fox News reports a harrowing scene in South America as a black market for women's hair, sex, and even breast milk crops up in Columbia as neighboring Venezuelan citizens desperately try to make any money they can while trying to survive a nation ravaged by the evils of socialism.

According to Fox News' Hollie McKay, "[t]housands upon thousands of Venezuelans pour into Colombia over the crowd cross-country bridge, their faces gaunt, carrying little more than a backpack. Rail-thin women cradle their tiny babies, and beg along the trash-strewn gutters. Teens hawk everything from cigarettes to sweets and water for small change."

Men hold signs or yell in crowds "Looking for hair. Buying hair," as if scalping tickets prior to a college football game. These men then make wigs from Venezuelan women's hair which they sell. As McKay reports, however, more saddeningly are the reports of child prostitution.

Amy Roth Sandrolini, "Chief of Staff at The Exodus Road, a U.S.-based organization devoted to fighting human trafficking globally," told Mckay that “[d]ue to the brutal economic situation in Venezuela, they come to Colombia looking for a job, or at least for shelter and basic care. But they usually end up selling candles or coffee at traffic lights. Where they also become vulnerable to being recruited, to become victims of human trafficking.”

Many of these victims of socialism are simply trying to raise money in order to buy medicine and vaccines.

“We can’t find any vaccines; we can’t find any medicines. Children in Venezuela are dying,” a 35-year-old Alberto Camacho told Fox News.  “I have to give my baby goat milk because baby formula is $12. It would take me three months to make $12.”

As a former Venezuelan political prisoner told McKay, “There is a human catastrophe in Venezuela. There is a resurgence of illnesses that were eradicated decades ago. Hundreds have died from measles and diphtheria. Last year, more than 400,000 Venezuelans presented malaria symptoms. Up to now, there are over 10,000 sick people from tuberculosis. People have been doomed to death. More than 55,000 cancer patients don’t have access to chemotherapy. Every three hours a woman dies due to breast cancer.”

Every single aspect of every Venezuelan's needs for basic survival is in jeopardy but, “The biggest concern is now food. 70 percent of people are facing steep food insecurity and acute malnutrition,” according to Miguel Barreto, the Regional Director for Latin America for the UN’s World Food Programme (WFP).

For a break down of how Venezuela ended here, Prager U's excellent video explains how a nation rich with resources and once vibrant culture can be destroyed by this far left ideology.

But, for a current look, Fox News' full report is well worth the read and should be shared with any American who advocates socialism and does not understand the horrors this system produces.