Authorities Say Synagogue Victims Ranged In Age from 54 to 97 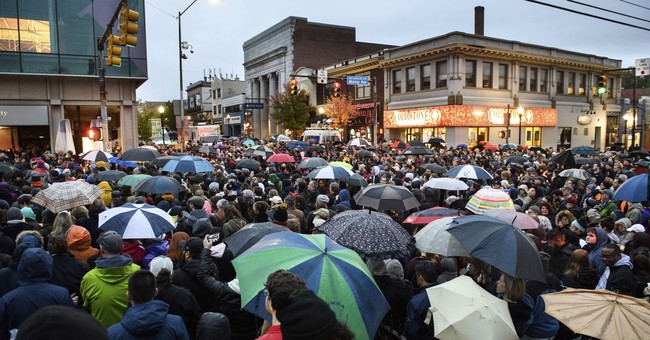 Authorities have released the names of the victims from yesterday's attack on a synagogue in the historic neighborhood of Squirrel Hill in Pittsburgh, PA as well other details about the tragedy which authorities say could take "weeks" to process and investigate.

According to the report, eight men and three women were killed when an anti-semitic lunatic opened fire during a bris, a special circumcision ceremony for newborn babies and their families. The victims were all adults and "ranged in age from 54 to 97 and included brothers and a husband and wife."

The suspect surrendered onsite and is currently in the hospital being treated for a gun wound. According to his previous Facebook posts, the gunman was a rabid anti-semite who hated Jewish people and anybody who supported their existence. Police also say that while in the hospital the gunman said that the Jewish people were "committing genocide to his people.”

Leaders from around the world issued statements of support and condemnation of hate. The president of Germany Frank Walt-Steinhemer said that, "this abhorrent crime reminds us all to do what is in our power to advocate against hatred and violence, against anti-Semitism and exclusion, and to counter with determination those who incite them.”

The leader of the Catholic Church Pope Francis said that, "In reality, all of us are wounded by this inhuman act of violence.” He also prayed for God “to help us to extinguish the flames of hatred that develop in our societies, reinforcing the sense of humanity, respect for life and civil and moral values," according to the Associated Press.

"The U.S. attorney’s office has charged [the gunman] with 29 federal counts. [He] is scheduled to make his first court appearance Monday. State authorities have also leveled charges," according to the Associated Press.