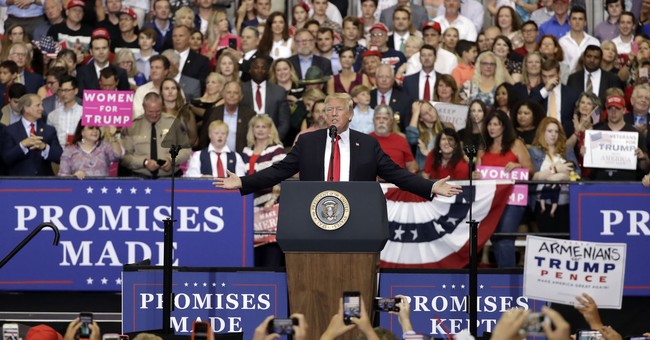 President Donald J. Trump has reached 500 days into his presidency. As Axios' Jonathan Swan points out,  his president has ushered in overarching change not just to the country, but within the Republican party itself.  It is this kind of change that led President Trump to enjoy record approval ratings from members of his own party. Of presidents since WWII, Mr. Trump's own party approval rating falls behind only President George W. Bush at this point in his presidency.

"In 500 days, Trump’s hijacking of the formerly conservative GOP is complete — an astonishing accomplishment. The majority party in America is fully defined by his policies, his popularity with the base, his facts-be-damned mentality, his ability to control and quiet virtually all Republican elected officials," writes Swan.

As pointed out by Bruce Mehlman, a recent Gallup poll shows Trump enjoying the aforementioned own party approval rating.

President Trump has 2nd highest "own party" job approval rating since World War II at day ~500, only behind Bush43 (after 9/11) (Source: Gallup) pic.twitter.com/cNhEAjMObO

These ratings may shock some Hollywood liberals such as Alec Baldwin. He falsely predicted, “I don’t think he’s going to make it till the end of the year. I think he can’t take the ridicule. I think he’ll resign.”

With 500 days down, President Trump still has 962 days in his first term.

Author's note:  The headline and article have been adjusted to reflect that Trump's second highest 'Own Party' approval rating is amongst presidents since World War II.