Report: John McCain Does Not Want President Trump at His Funeral 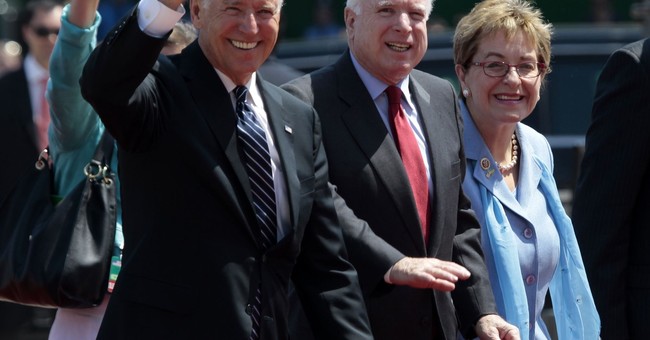 Arizona Senator John McCain has reportedly expressed his desire, or lack thereof, to have President Donald J. Trump at his funeral. According to the New York Times, he does not want the man there at all.

Sen. McCain, who is suffering from terminally ill brain cancer, has told close friends and associates that he would prefer Vice President Mike Pence to attend instead. Two former presidents will most likely be there and play a key role in the funeral service. President George W. Bush and President Barack Obama are slated to be the eulogists. It is unclear how close to death Sen. McCain is, but he is already planning his funeral services.

Sen. McCain may have reason to not want President Trump at his funeral. The two have had a sordid relationship. Trump has made very critical comments of the Vietnam veteran and former prisoner of war in the past. During the 2016 presidential election, President Trump said, “He’s not a war hero.  He was a war hero because he was captured. I like people who weren’t captured."

In a new memoir written by McCain, The Restless Wave, the senator says of Trump, "He seems uninterested in the moral character of world leaders and their regimes. The appearance of toughness or a reality show facsimile of toughness seems to matter more than any of our values. Flattery secures his friendship, criticism his enmity.”

According to the NYT report, McCain also expressed regret for picking Alaskan governor Sarah Palin as his vice presidential running mate in 2008. The "Maverick", as he is known in some circles, wishes that he chose his friend and independent Joe Lieberman.

There will be an HBO documentary coming out later this year about John McCain as well as his new book.