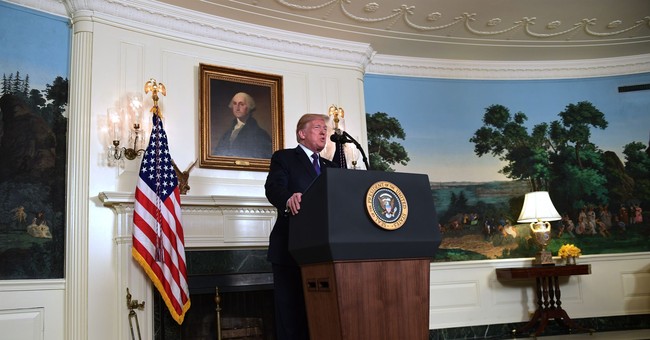 President Donald J. Trump addressed the nation last night, letting his fellow citizens know that a coalition of the French, British, and American military took a coordinated strike on Syria in reaction to Bashar al-Assad's alleged use of chemical weapons on his own civilians. Today he announced via Twitter, “Mission accomplished.”

“Today, the nations of Britain, France, and the United States of America have marshaled their righteous power against barbarism and brutality," President Trump read from the podium Friday at 9:00 PM.

“Establishing this deterrent is a vital national security interest of the United States," Trump continued. "The combined American, British and French response to these atrocities will integrate all instruments of our national power — military, economic and diplomatic. We are prepared to sustain this response until the Syrian regime stops its use of prohibited chemical agents."

105 missiles were launched all together and officials said the attack dealt Assad a "severe blow."

Syria media reported that several of these strikes were intercepted, but Pentagon spokesperson Dana White dismissed these claims. "I can assure you we took every measure and precaution to strike only what we targeted and –– and we successfully hit every target,” White told media.

Then, this morning President Trump declared the operation as a “perfectly executed strike.”

A perfectly executed strike last night. Thank you to France and the United Kingdom for their wisdom and the power of their fine Military. Could not have had a better result. Mission Accomplished!

So proud of our great Military which will soon be, after the spending of billions of fully approved dollars, the finest that our Country has ever had. There won’t be anything, or anyone, even close!

To this extent, White told media, "It was mission accomplished," she said indicating the goal of the attack was to prevent Assad from using chemical weapons, not necessarily become a longterm fixture of the Syrian civil war.

"Our focus remains defeating ISIS. It is not to get involved in the Syrian civil war," she added.