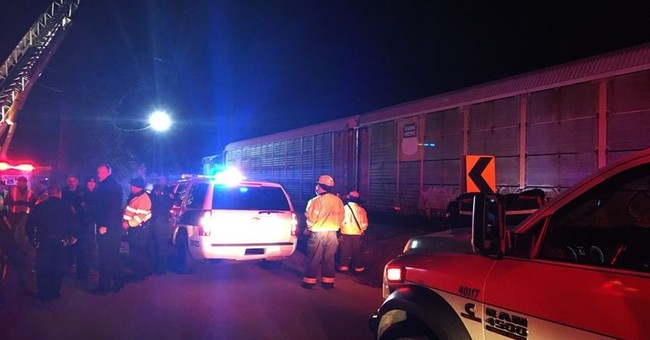 Fox News reports that at least two people were killed and 70 more injured early Sunday morning after an Amtrak train collided with a CSX freight train in South Carolina.

According to Fox News, “The South Carolina Emergency Management Division said Amtrak 91 was traveling from New York to Miami when it collided with the CSX train in Cayce around 2:35 a.m. At least 70 people were transported to local hospitals, Lexington County spokesman Harrison Cahill said at a news conference.

"The injuries range from cuts and bruises to severe broken bones,"said Derrec Becker, public information officer for South Carolina Emergency Management Division. "All the injured have been transported to local hospitals."

Becker also encouraged family members with loved ones on the train to call 1-800-523-9101 for more information.

“Anyone with loved ones on this train [#91 NY to Miami] can contact Amtrak directly at 1-800-523-9101” –Derrec Becker from S.C. emergency management pic.twitter.com/g9MhsNaMig

"The lead engine was derailed, as well as some passenger cars," officials added. The incident occurred just after 2:30 am this morning.

The accident occurred just outside of South Carolina's state capital. It is unclear how serious the other injuries are.

View of the train collision from the bridge on Charleston Highway. @WLTX #news19 pic.twitter.com/nv7GN2vAXZ

As noted by Politico, "Sunday's crash is the third fatal Amtrak crash within six weeks and comes less than a week after a chartered train carrying GOP lawmakers hit a trash truck in Crozet, Va., killing one of the truck's occupants. In December, an Amtrak train careened off the rails in Washington State as it headed into a curve, spilling cars onto a busy highway and killing three people."