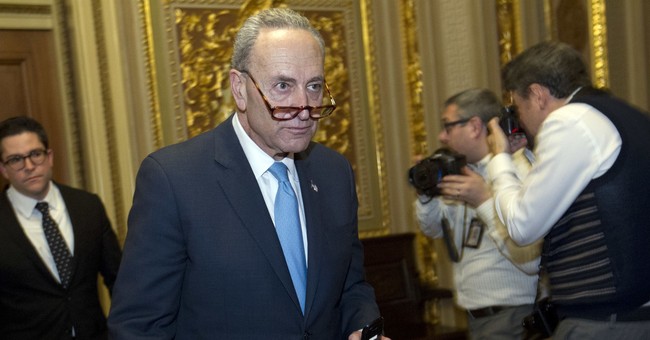 Press Secretary Sarah Sanders shared a heart-wrenching tweet Saturday highlighting the sacrifices that the American military makes on a daily basis and continues to make in spite of what occurs in Washington. Elsewhere on Twitter, the Senate GOP shared a #SchumerShutdown Clock counting the hours since Democrats forced a government shutdown.

Sanders tweeted a photo showing an American Forces Network TV screen saying “Due to the government shutdown, AFN services are not available.” AFN provides television and entertainment such as professional sports, movies, music, and many more simple pleasures to American military around the world.

I received this from a young infantryman serving in Afghanistan this morning. Sad that the men and women who have sacrificed so much are deprived of even the most basic connection to home bc Democrats are playing political games. #SchumerShutdown pic.twitter.com/jcUqU2crF1

That image is in stark contrast to the one preceding it. Sanders also shared a letter from Secretary of Defense James Mattis to American military, encouraging them to “hold the line” as America deals with the shutdown. Despite the federal government impasse, our nation’s heroes are still required to work and defend the freedom we all enjoy. Mattis also promised his “personal commitment that the Department's leadership will do (their) best to mitigate the impact of the disruptions and any financial burdens” to military families. He ended his note on an encouraging tone saying, “I know our Nation can count on you.”

Letter from Secretary Mattis to our great military on #SchumerShutdown
"Steady as she goes - hold the line. I know our Nation can count on you." pic.twitter.com/BvNYQsuAGU

As noted by the Stars and Stripes, the abrupt temporary cancellation of the AFN comes at a particularly bad timing, as many American soldiers were depending upon the network to watch the National Football League Championship games this weekend.

While American forces and many others wait for the Democrats to compromise to reopen the government, the Senate GOP started a #SchumerShutdown Clock to highlight the amount of time that has lapsed since 230 Democrats voted to shutdown the government.