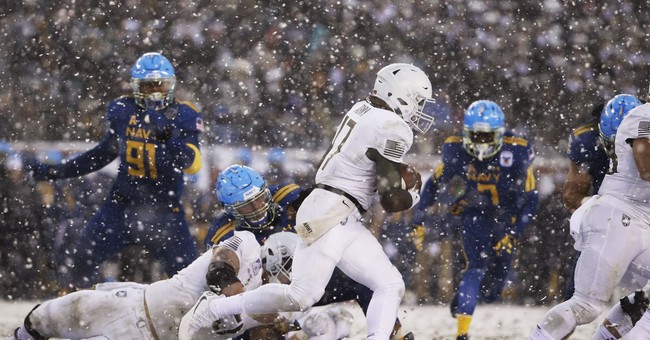 In the 118th Army vs. Navy football game, the Army Black Knights defeated the Navy Midshipmen 14-13 in wintry conditions, securing the Commander-In-Chief Trophy for the first time since 1996.

Due to the snow and wind, the offensive  scheme for both teams was played largely on the ground as opposed to passing. Army quarterback Ahmad Bradshaw rushed 21 times for 94 yards and scored the game-winning touchdown.

Navy had a chance to win as time expired in Philadelphia’s Lincoln Financial Field, but a field goal by Navy’s Bennett Mohering missed the uprights wide left. Army, decked in special all white uniforms which blended in nicely to the weather, won back-to-back games for the first time in 21 years.

Fittingly played in the City of Brotherly Love, choirs from both academies joined together, standing side by side to sing our Nation’s anthem prior to the game.

While the game brings with it the reverence and respect these young men and women deserve, it also allows a chance for these college age students to partake in normal Gameday shenanigans. U.S. Marine, IJR Staff Writer, and friend Julio Rosas captured several signs from Navy ribbing Army for allowing a communist within their ranks.

Navy with the savage burn against the West Point graduate who advocated for communism in uniform. #ArmyNavyGame pic.twitter.com/KWZo7LKhfO

The game truly represents the beauty of sports and American culture as both teams passionately join in brotherhood and battle it out on the field of competition. While many college age students are using their youth to simply party and get a degree, these individuals have sacrificed their time, effort, and livelihood to defend this nation.