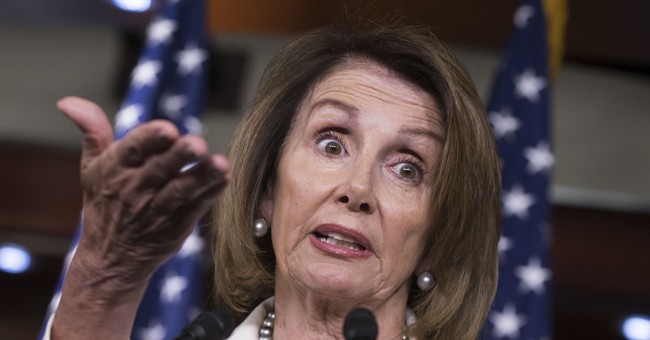 House Minority Leader Nancy Pelosi (D-CA) refused to say that she would sit and negotiate with a “rogue” President Donald. J. Trump over issues such as healthcare, illegal immigration, and taxes in an appearance on ABC’s This Week hosted by George Stephanopoulos.

“(President Trump) wants to sit and talk. Will you?,” asked Stephanopolous.

“I think we're a little far down the road for that. But before we go into him and that this Sunday morning, we have to be prayerful for what is happening in California, on top of Puerto Rico, Texas, Harvey, Irma.” Pelosi responded.

"The wildfires in California, the hurricanes throughout our country, the violence in Nevada. People are hurting. We have to be very prayerful about that.

And at this time, you're suggesting that we sit down with the president.”

The president says repeal and replace. Where is the replace? We haven't seen anything. I don't think -- I think that -- this week, the week of Friday the 13th, is the week that President Trump went rogue. He went rogue on women's health in particular, the Affordable Care Act, the Iran decision that he made, and as he continues his war on the middle class, with his unfair tax plans.” (Emphasis added)

.@NancyPelosi to @GStephanopoulos: "This week, the week of Friday the 13th, is the week that President Trump went rogue." pic.twitter.com/LfA6j2n6dx

When pressed that if Democrats and Republicans were to compromise, the President would obviously expect some of his priorities in return, Pelosi refuted the notion they would be willing to negotiate Obamacare by trading off a border wall.

“Please. He wants to negotiate the health care bill by repealing the Affordable Care Act and building a wall? No.

“What I think -- in other words some of the things he did the other day, like saying, you can buy insurance across state lines. That's already in the Affordable Care Act. So, I'm just saying, what are -- what are his priorities? Except the priority for many of them is, there should be no government role. They never really, the Republicans, never really supported Medicare when it came into being. They now say it should wither on the vine.”

As Pelosi said, there was already a provision in the Affordable Care Act which allowed for that. This is technically true, but the Obama administration never fully implemented that provision because it never established the necessary regulations.

Pelosi’s comments on Sunday are in stark contrast towards Presidnet Trump, who earlier in September was praised by Pelosi and Senate minority leader  Chuck Schumer (D-NY) for his willingness to work with Democrats on deals such as spending and the debt limit.

In September, Pelosi, Schumer, and Trump formed a collation which extended the debt ceiling limit for three months.

“I make no apology for doing that with the person who is going to sign the bill,” Pelosi said. “It gives you great leverage.”