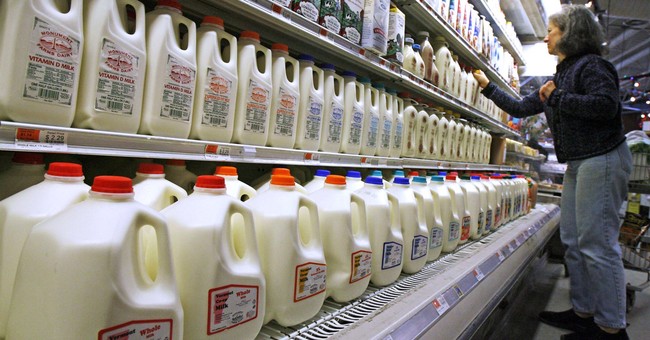 Inflation for consumers rose 0.3 percent in April for a 8.3 percent increase in the last 12 months — hotter than the 8.1 percent consensus prediction — as the Biden administration struggles to get a handle on the runaway price increases spurred by the president's policies.

According to the Bureau of Labor Statistics, "shelter, food, airline fares, and new vehicles were the largest contributors" to April's hotter than expected increase. Excluding the food and energy indices, month-over-month inflation was up 0.6 percent, double the 0.3 percent increase reported for March.

The food index showed prices are up a staggering 9.4 percent over the last 12 months — the biggest year-over-year increase since the year ending April 1981 — its seventeenth consecutive monthly increase. Dairy and related products alone rose 2.5 percent in April, its largest monthly increase since July 2007, and eggs increased 10.3 percent in April.

The only decreases reported in Wednesday morning's CPI release paled in comparison to the increases in other inflation metrics: apparel went down 0.8 percent in April while communication and used cars/trucks each decreased 0.4 percent.

Consumer inflation — once dubbed "transitory" by the White House — has stuck around four-decade highs in recent months after surging upward after President Biden took office, and April's year-over-year increase is nearly double last April's reading. Here's a quick look at the YOY inflation data for each month since Biden took office in January 2021:

President Biden, however, continues to refuse any accountability for the pain being felt by Americans under the crunch of rising prices and lower real wages. Instead, he has attempted to blame Putin's invasion of Ukraine (which came after YOY inflation had hit >7% for multiple months) and the COVID-19 pandemic (a virus which candidate Biden promised he would "shut down" instead of the U.S. economy).

In an event billed as addressing inflation on Tuesday, Biden admitted that he can "taste" the frustration of Americans being forced to cut costs or take on new debt due to inflation, but maintained that his administration's economic policies have helped, "not hurt" the U.S. economy and the American people.

With an out-of-touch take like that, it's no surprise that President Biden's approval rating is underwater, or that some two-thirds of Americans think Biden is failing to handle the economy. With November's midterms looming, Biden has sought to portray Republicans as wanting to raise taxes on Americans while lowering their incomes — even though that's what his policies have already done.