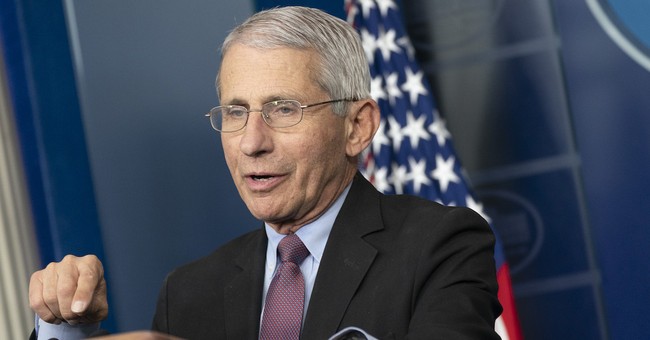 Townhall regrets to inform you that Dr. Anthony Fauci is, according to reporting by The Guardian, "the sexiest man alive."

No, really. It's not The Onion. It's not The Babylon Bee. It's the work of a supposedly serious publication that touts its "200 years of independent journalism."

As Townhall covered previously, Fauci has spent a good amount of time on the covers of magazines as the liberal elite salivated over his bespectacled and wrinkly visage during the course of the Wuhan coronavirus pandemic. But being called the sexiest man alive is a new level of fandom for the octogenarian.

"The US diseases expert has been spoofed by Brad Pitt and lauded as the 'sexiest man alive,'" notes The Guarding in its latest profile. Fauci, they say, "has become an unlikely cult hero for millions of people during the Covid pandemic." Except it's not that unlikely when you have every late-night host, daytime TV liberal, and CNN host fangirling and pushing "In Fauci We Trust" propaganda.

The Guardian's sappy screed claims that the inexplicable love for Fauci "says as much about his devotion to saving lives, as well as his willingness to listen and his role as a candid truth-teller." Sure, Tony.

As Townhall has also covered, Fauci's track record is one filled with backtracking, obstruction, denials that are later called into question, and a lack of forthrightness based on what he subjectively decides Americans can handle to know.

Being propped up again, Fauci's latest profile was spurred on by a new documentary called "Fauci" that seeks to venerate the defiant doctor for his roles in multiple public health crises that he failed to adequately respond to. The director of "Fauci" says the film is "a portrait of a man whose career has spanned seven US presidents and been bookended by the two great pandemics of the past century... He was forged in the Aids pandemic and he was tested in the Covid pandemic."

The Guardian quotes another who says "this film shows you that he's someone who has done the work, who has integrity around what he's saying and is not seeking fame. I have not known anyone with more humility in my lifetime."

It's absurd but perfectly on-brand for the mainstream media that also hyped up the "Cuomosexuals" and runs around knighting random officials with fame for no reason other than their willingness to push the preferred narrative of the liberal elite.

It's worth noting that if the pandemic had ended, Fauci would likely by now have faded back into obscurity. Conveniently for Fauci, it hasn't, and his cover model status can continue as supposedly credible and independent news sources continue. And it will for as long as they turn a blind eye to the inconsistencies in his messaging and the increasingly likely reality that Fauci and his unelected bureaucrat buddies played a part in the research that gave us the Wuhan coronavirus.