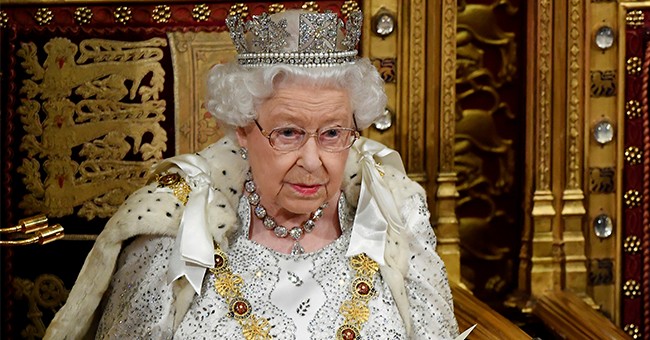 In the Queen's Speech to both houses of Parliament Tuesday, Queen Elizabeth announced that the government would press ahead with plans to implement an electoral integrity bill similar to measures recently signed into law by U.S. governors that saw Democrats respond with trademark hyperbole.

In her remarks to the House of Lords and the House of Commons, the Queen stated that the government "will strengthen and renew democracy and the constitution" and that "legislation will be introduced to ensure the integrity of elections."

Similar safeguards on election integrity here across the pond in the United States have been laughably blasted by President Biden as worse than Jim Crow, or, Jim Eagle, or whoever.

The Queen's Speech reiterated a commitment to securing U.K.'s elections, a process that's been underway for years and which proponents hope to have in place by 2023. The plans being worked out were explained further in a House of Commons Library briefing released ahead of this year's address by the Queen:

"The Government promised measures to protect the integrity of elections. It planned to require voters to show an approved form of photographic ID at a polling station in a UK parliamentary election in Great Britain and local election in England (photo ID is already required in Northern Ireland). It also said voters without appropriate ID would be able to apply, free of charge, for a local electoral identity card."

Test runs of a voter ID requirement conducted by the U.K. government in 2018 and 2019 found, unsurprisingly, "the experience of taking part in the pilot scheme appeared to have had a positive impact on people’s perception of the security of the polling station process."

But these successful pilot programs and the proven effectiveness of Northern Ireland's photo ID requirement don't matter to American leftists who have pivoted from calling out Georgia and other states' election integrity laws to go after the Queen.

Usual suspects at the American Civil Liberties Union and Southern Poverty Law Center returned to their normal antics that prove the soft bigotry of low expectations remains a favorite cudgel of the supposedly "progressive" Left.

"The real reason these laws are passed is to suppress the vote, and that is in fact what happens,” claimed Caren Short of the SPLC in a quote to the Guardian, an allegation that is of course not backed up by the U.K.'s pilot programs testing photo ID requirements. She added that "There are certain communities that do not possess the required ID, or the underlying documents required to get the ID, and so it makes it harder for those folks to vote."

A supposed voting rights expert at the ACLU echoed the bigoted claims, saying measures to secure election are "about excluding the people who are least likely to have that ID." Never mind these same people presumably manage to purchase items, board flights, and do any number of things that require an ID already.

Again, through the pilot programs and analysis of Northern Ireland's system, "where voters without access to approved photo ID can apply for a free photographic electoral ID card from their local council" showed that "most voters in Northern Ireland, which had individual registration and voter ID requirements before the rest of the UK, considered [their] voting arrangement to be ‘gold standard.’"

Facts of course matter little to those who prefer an unsecured election system, but the U.K.'s work toward full photo ID to vote has already shown what American leaders who pursue similar protections know to be true: election integrity makes voters more confident in the democratic process, is not a detriment to voter turnout, and greatly reduces opportunities for fraudulent votes to be counted.