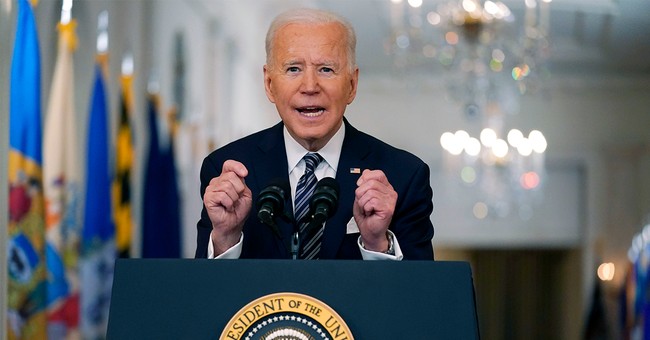 We've been pointing out how dishonest and inaccurate the Left's narrative – amplified throughout much of the media – has been regarding Georgia's new elections law. Activists purchased the internet domain name "Jim Crow 2.0" weeks before a final bill was passed, demonstrating their talking points were pre-set, regardless of substance. Like clockwork, Stacey Abrams, Vice President Harris, President Biden and others have all invoked that dreadful legacy to denounce the GOP-passed law, with Biden going so far as to frame Georgia's legislation as worse than Jim Crow – an insulting and historically illiterate assertion. The Washington Post's fact-checker reviewed Biden's demagogic and false comments on this subject and awarded him "Four Pinocchios" for his rhetoric:

WaPo fact check: “The law did make some changes to early voting. But experts say the net effect was to expand the opportunities to vote for most Georgians, not limit them.” https://t.co/HQxPanuITJ

“Somehow Biden managed to turn that expansion into a restriction aimed at working people, calling it “among the outrageous parts” of the law. There’s no evidence that is the case. The president earns Four Pinocchios”https://t.co/WMP3hdP6mN

"The net effect was to expand opportunities to vote for most Georgians, not limit them." What a departure from the hysteria. Biden had railed against the "sick" and "un-American" law, complaining that it "ends voting hours early," which he called an insult to working people. But that's not what the law did at all, the Post clarified: "Biden framed his complaint in terms of a slap at working people. Many listeners might assume he was talking about voting on Election Day, not early voting. But Election Day hours were not changed." Early voting was expanded, not restricted, and voting hours were not curtailed. Another ridiculous charge rocketing around the internet is that Georgia has "banned" food and water near polling places, as voters are waiting in line to cast ballots. This simply is not true, as we addressed yesterday (among other things, the law actually works to reduce these lines). Republican strategist Josh Holmes raised this same correct point on "Fox News Sunday," and promptly got slapped with a "mostly false" so-called "fact-check" from the notoriously left-leaning PolitiFact organization. Holmes and allies exposed how PolitiFact distorted what he actually argued in order to arrive at a negative truth rating:

Then the queries shifted to whether I believed people who were not electioneering would be criminally prosecuted for providing water. I said it was an interesting question but not one I weighed in upon.

The reason it’s important is the intent of the law. If the provision outlawed water at the polls it could easily be construed as intending to deter waiting to vote. Instead, the statute specifically referenced the manner in which it could be provided. *not by political operatives

They appear to have decided ahead of time that Holmes had said something misleading, regardless of what he'd stated on-air, then kept moving the target as he addressed their objections and questions. Quite a racket from a "truth" watchdog. Here's my recent interview with Georgia Gov. Brian Kemp on this very subject:

I'll leave you with Ramesh Ponnuru calling out more ignorant misinformation from progressives on this front. Rubin's point is way off, as very recent polling has yet again revealed:

After calling other people "uniformed," @JRubinBlogger shows herself unfamiliar with the polling, which has frequently shown a majority of African-Americans and Democrats in favor of voter id. https://t.co/M9Kv2XicTW