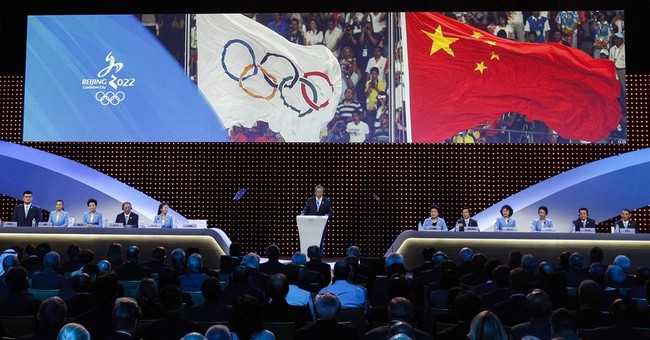 With fewer than 100 days before the delayed Summer Tokyo Olympics are set to begin, a bipartisan group of lawmakers renewed their calls for the United States to boycott the next Winter Olympics if China remains the host of the 2022 Winter Games currently slated to take place in Beijing.

"If we go forward with these Olympic Games, it's going to do nothing but embolden China," noted Rep. Guy Reschenthaler (R-PA), who co-hosted a roundtable Thursday with Rep. Michael Waltz (R-FL). "When we embolden China, they'll take more aggressive steps," Reschenthaler added.

Today I joined a roundtable w/ @michaelgwaltz, @NikkiHaley, & @newtgingrich to discuss the importance of holding Communist China accountable for its human rights abuses.

The 2022 Olympic Games must be moved from Beijing or a boycott is the only option. pic.twitter.com/lmDsXt60nh

There are reasons aplenty to object to China hosting the Olympic Games or any event that would embolden more aggression. There's the horror of their concentration camps for Uighurs. Their lies to conceal critical data about coronavirus, and subsequent hawking of defective COVID tests. Don't forget about their assault on Hong Kong's freedom and autonomy.

50th Speaker of the House Newt Gingrich also joined the roundtable to warn against American validation of China hosting the 2022 Olympics: "If what [Beijing] learns is that it can say anything, it can do anything, it can torture, it can kill, it can exploit people like the Uighurs... then we've sent an extraordinarily dangerous signal that will lead to even worse behavior in the future."

Thank you @newtgingrich, @NikkiHaley and all of the human rights organizations for joining us today to call on the U.S. to #BoycottBeijing2022.

We cannot stand by as the #CCP commits horrendous crimes against humanity. https://t.co/0z85jKRNbc

Ambassador Nikki Haley, whose previous work included holding China accountable at the United Nations, stated the importance of rallying other freedom-loving nations to join a boycott: "Let's join together, let's boycott the Beijing Olympics, and let's hold China accountable for all the physical abuse, the sexual abuse, the genocide, and their arrogance in the way they're trying to take over the world." Haley warned what the Olympics mean to the Chinese Communist Party: "This Beijing Olympics, they're coming to announce to the world that they are now the major superpower in the world. We can't let them have that."

But it's not just Republicans who share concerns about the rabidly Communist nation acting like a decent actor deserving an equal footing with free countries.

Democrat Rep. Tom Malinowski (NJ) joined Thursday's roundtable to slam the decision giving China the 2022 Olympics: "It is completely inappropriate for the [International Olympic Committee] to be holding an Olympic Games in a country that is in the process of committing what the State Department, what the Biden Administration, has termed a genocide."

It's worth noting that White House Press Secretary Jen "Circle Back" Psaki hasn't been too keen on questions regarding a potential U.S. boycott of the Beijing Olympics—and the Biden Administration seems more interested in boycotting the state of Georgia than those who subject religious minorities to forced labor and other atrocities.

.@RealClearNews's @PhilipWegmann asks Jen Psaki if the Biden White House is so adamant about having MLB move its All-Star Game from Georgia because of the voting law, why aren't they calling for a boycott of the 2022 Winter Olympics in Beijing?!

Allowing Communist China to host the Olympics is bad enough. But the United States—known the world over as the greatest force for freedom—shouldn't play into the charade that China has any claim to a prestigious or positive image on the world stage.