Disgusting: NBA Grovels Before Communist China After Rockets' GM Speaks Up in Support of Hong Kong 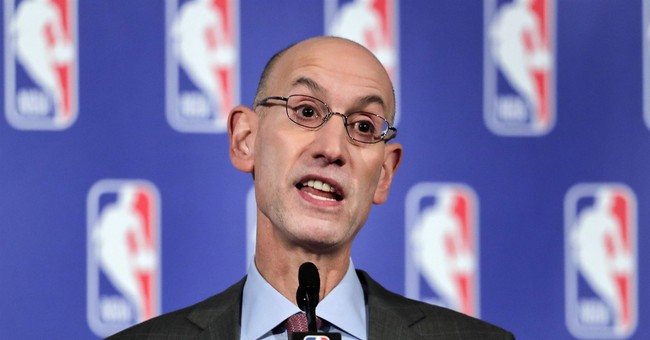 The National Basketball Association would like you to know that it is extremely woke and conscientious.  During the anthem wars, the league's commissioner, Adam Silver, preened publicly about free speech and expression being "a core set of American values" to which the league was firmly committed.  After a viral firestorm involving transgender people and bathrooms in North Carolina, in which the state's legislature passed a controversial law, the NBA ostentatiously announced its retaliatory decision to yank its all star game out of Charlotte.  Silver also jettisoned the word "owner" to describe the people who, well, own NBA franchises, after certain political correctness enforcers decided the term represented a problematic echo of slavery-era dynamics.  That comparison fails on several levels, but the demanded rhetorical sanitizing occurred anyway.

In a critical Daily Beast column published last year, one observer accused the NBA of embracing a "fake woke" business model, arguing the league's social justice posturing was a calculated financial decision, as opposed to a genuine nod to morals or conscience. "Commissioner Adam Silver and a passel of NBA officials clearly took a gander at the demographics and churned through piles of market research before coming to the painfully obvious conclusion that a gauzy, snackable form of leftism, one that would broadly appeal to its customer base, was very much in the NBA’s best financial interests," the piece noted.  In light of new developments, that take is looking spot on.  The league's phony wokeness does not extend to lifting a finger in any way, shape, or form that could potentially offend the Chinese government -- thus imperiling a vast, emerging and lucrative market of fans.

That's not an exaggeration.  When Houston Rockets' General Manager Daryl Morey tweeted in support of the pro-democracy protesters in Hong Kong, all hell broke loose.  Chinese sponsors cut ties with the organization, as the regime in Beijing reacted furiously (in keeping with its pattern of anti-speech intimidation and punishment).  Reports began to circulate that Morey might be in danger of losing his job; he quickly posted a series of mealy-mouthed tweets to 'clarify' his position and emphasize that his pro-democracy views "in no way represent the Rockets or the NBA."  Both the Rockets' owner -- er, 'governor' -- and the NBA made that reality perfectly obvious with their own pathetic missives:

NEW: the NBA has released a statement on Daryl Morey: pic.twitter.com/FOI79W31b1

The league's statement in Mandarin was even worse, calling Morey's tweet in favor of Hong Kong's freedom an "inappropriate" affront to the feelings of Chinese fans, in which the NBA is "extremely disappointed."  The league now claims they did not intend to have any differences between the American and Chinese versions of their official comments, and that the discrepancy is attributable to translation issues.  Read the two paragraphs side by side, consider the intended audiences, and decide whether or not you believe that excuse.  Meanwhile, at least one NBA super star has now apologized for Morey's tweet while on the ground in China -- where the league and (also super woke) ESPN have begun a tour of promotional games and broadcasts.

Perhaps worst of all thus far, the owner (or whatever we're allowed to call him) of the Brooklyn Nets, Joe Tsai, published an open letter to fans that reads like a full apologia for Communist China, including the Orwellian formulation that Hong Kong's democracy forces constitute a "separatist" movement.  Tsai's Facebook post demands that Americans learn the relevant history, yet makes no mention of the brutal and oppressive history of the communist regime.  His commentary is nearly indistinguishable from Beijing propaganda, aside from the candid quasi-admission that revenue is driving all of this moral blindness:

By now you have heard that Chinese fans have reacted extremely negatively to a tweet put out by Houston Rockets GM Daryl Morey in support of protests in Hong Kong. The Rockets, who by far had been the favorite team in China, are now effectively shut out of the Chinese market as fans abandon their love for the team, broadcasters refuse to air their games and Chinese corporates pull sponsorships in droves. Fans in China are calling for an explanation – if they are not getting it from the Houston Rockets, then it is natural that they ask others associated with the NBA to express a view. The NBA is a fan-first league. When hundreds of millions of fans are furious over an issue, the league, and anyone associated with the NBA, will have to pay attention. As a Governor of one of the 30 NBA teams, and a Chinese having spent a good part of my professional life in China, I need to speak up.

He "speaks up" by briefly mentioning that the freedom to express opinions is nice in America, but, "the problem is, there are certain topics that are third-rail issues in certain countries, societies and communities."  Freedom of speech must be respected...until the speech hits a "third rail issue" that triggers the "strong sense of shame and anger" many Chinese people may feel.  Appalling.  Tsai concludes:

By now I hope you can begin to understand why the Daryl Morey tweet is so damaging to the relationship with our fans in China. I don’t know Daryl personally. I am sure he’s a fine NBA general manager, and I will take at face value his subsequent apology that he was not as well informed as he should have been. But the hurt that this incident has caused will take a long time to repair. I hope to help the League to move on from this incident. I will continue to be an outspoken NBA Governor on issues that are important to China. I ask that our Chinese fans keep the faith in what the NBA and basketball can do to unite people from all over the world.

Morey, I should note, did not actually apologize -- and I hope this condescending lecture from Tsai makes him even less inclined to do so.  As is the case with Hollywood and corporate America's astoundingly hypocritical 'social justice' displays here at home, this is really all about money and signaling.  Beijing has brazenly attempted to abrogate the terms of its treaty in Hong Kong, whose citizens are demanding their freedom in the face of a crackdown.  China habitually threatens our allies, chronically steals our intellectual property, and relentlessly spies on and hacks the US and our closest friends -- to say nothing of their currency manipulation and myriad nefarious actions on global trade.  The regime's human rights record is also abysmal, underscored by their horrific persecution and 're-education' of religious minorities in western China.

But given how much cash is in the offing, Hollywood studios are willing to censor their own content to appease the Chinese government in order to maintain access to that giant market -- and the NBA is similarly willing to shelve its wokeness.  Sorry, besieged Hong Kongers, Muslims in concentration camps, and forcible organ harvesting victims, there are mountains of money to be made; as such, 'core values' need to be flexible.  I'll close by encouraging you to watch the latest, scathing, and prescient episode of South Park, which shames Disney, the NBA and other American corporations for selling out to China.  The show cut so close to the bone that is has been scrubbed from China's state-censored internet.  Perhaps Adam Silver can deputize Joe Tsai to issue a craven, groveling denunciation of the Comedy Central cartoon.  For progress, of course.