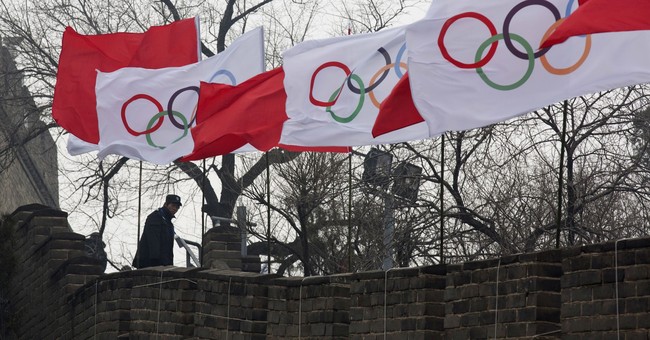 Rep. Michael Waltz (R-FL) called on Tuesday for the Biden administration to “walk the walk” on human rights and boycott the upcoming 2022 Beijing Olympics games.

The  Games, set to commence next February, have become a target of mounting criticism from both the left and the right over concerns of ongoing human rights’ violations within the People’s Republic of China. Earlier this week, Rep. Waltz proposed a resolution in the House to boycott the Games if the Internal Olympic Committee (IOC) refuses to relocate them.

In an interview with Hugh Hewitt, Rep. Waltz defended his position, arguing that the “Chinese Communist Party has unleashed the Coronavirus on the world, it covered it up, arrested journalists, arrested doctors, obfuscated an investigation by the WHO, and now is actively committing genocide, forced rape, forced sterilization, slave labor in concentration camps literally as we speak,” concluding with the question, “how do we then have the American flag flying in Beijing?”

Rep. Waltz stressed that the ideal solution would be for the IOC to relocate the upcoming Games, but with the event less than a year away, he was clear that a boycott would be a necessary step if the international committee chose to disregard the public outcry.

The recent criticisms of China stem from both their handling of the global pandemic and their human rights abuses against Uighur Muslims.

In late 2019, China’s Wuhan Province became the epicenter of the Covid-19 pandemic and the People’s Republic has since been accused of mismanaging the initial outbreak and misleading the world in an effort to save face publicly and downplay their own culpability.

At the same time, the communist regime has forced over a million Uighur Muslims into concentration camps that the country originally denied, but ultimately acknowledged as “re-education centers.” Reports of systematic violence within the camps include torture, rape and forced sterilization.

In an open letter to governments around the world, a coalition of 180 human rights groups requested a boycott of the 2022 Beijing games to “ensure they are not used to embolden the Chinese government's appalling rights abuses and crackdowns on dissent.”

For their part, the U.S. Olympic and Paralympic Committee has pushed back against calls to boycott, opposing the idea “because they (boycotts) have been shown to negatively impact athletes while not effectively addressing global issues.”

According to White House press secretary Jen Psaki, the administration is “not currently talking about changing our posture or our plans as it relates to the Beijing Olympic.”