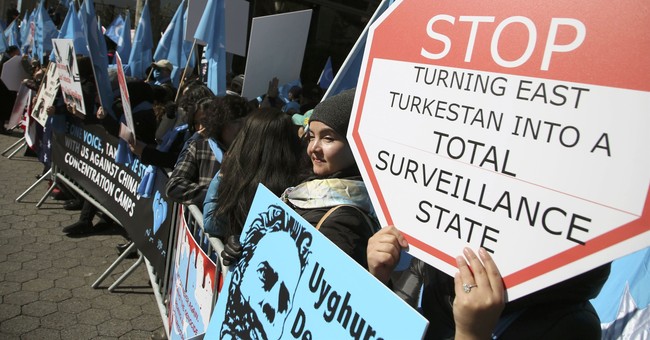 Part of the reason I was so angry and offended by the NBA's craven coddling of China -- aside from a sense of personal loyalty to the people of Hong Kong, where I lived for nearly seven years as a child -- is the degree and scope of evil being perpetrated by the regime. At some point, stifling criticism to facilitate your own enrichment, crosses a line into complicity. The hypocrisy angle is also galling, of course, but that's s secondary (if powerful) complaint. In a recent Washington Post column entitled, "In China, Every Day Is Kristallnacht," Fred Hiatt describes the horror:

In western China, the demolition of mosques and bulldozing of cemeteries is a continuing, relentless process. In a cultural genocide with few parallels since World War II, thousands of Muslim religious sites have been destroyed. At least 1 million Muslims have been confined to camps, where aging imams are shackled and young men are forced to renounce their faith. Muslims not locked away are forced to eat during the fasting month of Ramadan, forced to drink and smoke in violation of their faith, barred from praying or studying the Koran or making the pilgrimage to Mecca. And — in possibly the most astonishing feature of this crime against humanity — China has managed to stifle, through 21st century repression and age-old thuggery, virtually any reporting from the crime scene.

Some of the journalism that does get done on this issue is stunning, but has prompted relatively muted global outcry (this move from the Trump administration was welcome, at least). If you missed this post, you really should take the time to watch this investigative report from BBC News:

A recent interview with a woman who endured these concentration camps sheds additional, horrifying light on what is happening to ethnic and religious minorities at the hands of the Communist government (content warning):

Kazakhs are just one of the Turkic Muslim ethnic minorities detained in labor camps in Xinjiang, China. Recently, the plight of ethnic Uighurs in this part of China has gained international attention, with reports of organ harvesting coming to light at a meeting of the UN Human Rights Council in September. Sauytbay also described horrific conditions during her detention, including inadequate health care, crowding, and almost nonexistent hygiene. Prisoners who were observant Muslims were forced to eat pork, a food that's considered haram, or forbidden, in Islam..."They would punish inmates for everything," Sauytbay told Stavrou through an interpreter. "Anyone who didn't follow the rules was punished. Those who didn't learn Chinese properly or who didn't sing the songs were also punished," she said.  Punishments could be anything from being deprived of food to having one's fingernails ripped out, or worse.

Sauytbay describes being forced to witness a gang rape while at the camp. A young woman, she says, was forced to disrobe after being forced to "confess" her sins in front of around 200 prisoners. The young woman was then raped by several police officers, Sauytbay said. "While they were raping her they checked to see how we were reacting. People who turned their head or closed their eyes, and those who looked angry or shocked, were taken away and we never saw them again." There were also medical experiments performed on the prisoners, according to Haaretz; they were forced to take pills and were given shots, but were not told the truth about what the medical procedures did. Some who were subjected to them report impotence and cognitive decline...Forced abortions and contraceptives have also been reported in The Washington Post and Haaretz...Perhat told The Post she was repeatedly raped by Chinese guards; she twice found herself pregnant and had the pregnancies forcibly terminated.

How can anyone in good conscience turn a blind eye to any of this, let alone all of it? Especially people who climb up on their soap boxes about policies or social phenomena they oppose here at home. This of course applies to the NBA, but also major corporations like Disney and Nike -- and entertainers like Taylor Swift. Or is there a price tag on silence? I'll leave you with this, in reference to new, brutal crackdowns by Hong Kong's Beijing-backed police:

We know that LeBron James (https://t.co/ilHkDm02l4) and Steve Kerr (https://t.co/YjDPEymnyk) have strong feelings about police violence.

So any thoughts on this, or nah? #HongKong pic.twitter.com/ZsUyl1LJR7