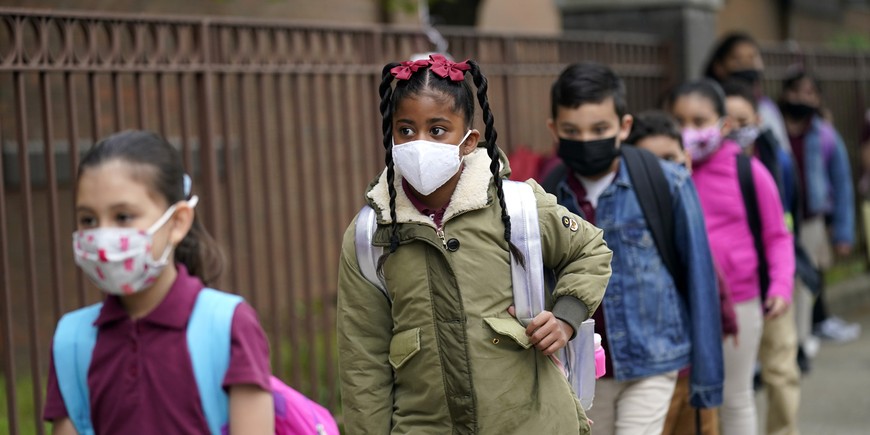 New data coming out of Florida school districts show virtually zero difference between masked vs. unmasked counties, even as Covid-19 cases plummet across the state.

Leftists hellbent on forcibly masking every child in schools across the country never had any solid data to back up their position, only emotional pleas and scare tactics. In truth, however, this virus has never posed any statistical risk to children, nor were they a significant transmitter to adults. And besides, if teachers were vaccinated, what were they worried about?

While many districts refused to implement mask mandates in their schools, others stubbornly insisted upon them, even defying an order from Republican Florida Gov. Ron DeSantis to allow parental exemptions. We were assured that the masked counties would fare far better than the 'Wild West' unmasked ones, where the bodies of schoolchildren would presumably be stacked in the streets, or something.

Except, none of that happened (via press release from DeSantis' press secretary, Christina Pushaw):

New COVID-19 cases for children ages 5-17 – the vast majority of the school-aged population – have decreased 79% in the month of September, in the 54 Florida counties where school districts have no masking policy or are following state law by honoring the parental opt-out rule.

For comparison, COVID-19 cases for children 5-17 in the 13 districts that imposed forced-masking in schools have decreased 77%, on average.

The 54 districts with opt-outs or no mask policy have seen an average decrease of 65% in positivity from week ending Aug. 19 (when school started) to the week ending Sep. 30.

The 13 districts that broke the law to impose forced-masking have seen an average decrease of 67%.

That is to say, the data for this school year to date shows no impact of forced masking in schools on pediatric COVID-19 prevalence. This is not surprising, since there were no statistically significant differences in case rates in forced-masking versus mask-optional schools during the 2020-21 school year in Florida.

Meanwhile, Covid-19 cases and hospitalizations continue to decline across the state, despite largely maskless schools and no governmental vaccine mandates (via press release).

At 27 new infections per 100,000 people, Florida now has the second lowest rate of COVID-19 infection in the entire country. Since the August 25 peak, the number of estimated infections by Nowcasting (covidestim.org) has decreased 95.9 percent. The reproductive transmission number (Rt) statewide is at 0.49 from a peak value of 1.45 on July 15.

At 4.8% positivity rate over the past 7 days, Florida would now be considered “low transmission” according to CDC guidance. Cases on a 7 day average have fallen 77 percent in the past month alone. The number of cases reported yesterday was the lowest since July 5.

COVID-19 hospitalizations are down to 4,562. This is a decrease of 73% since the August 22 peak, and more than 40 consecutive days of decline. According to HHS data updated today, just 8.45% of inpatient beds in Florida hospitals are being used for COVID-19 patients. This is lower than the national average of 9.71%.

As usual, the hard data supports sanity and normalcy not just in America's schools, but for everyone else as well.