The 'Science' Behind School Masking Suffers Another Blow 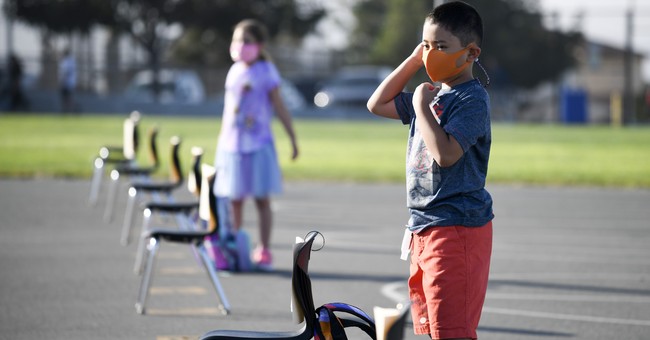 I've written about this issue on multiple occasions, and I've made my position clear.  I'm not fanatically opposed to kids wearing masks in schools -- and still view that non-optimal outcome as strongly preferable to repeating last academic year's "virtual learning" disaster that harmed so many children.  But not requiring students to mask up, or at least offering exceptions and opt-outs for parents, seems like an entirely reasonable public policy call for officials to make.  If data were to emerge that masks are significantly effective in stopping the virus from spreading in schools, that would be one thing.  We should always be open to data.  But as we've covered before, the furious attacks against Republican governors like Florida's Ron DeSantis for opposing universal mask mandates in schools seem more rooted in politics, emotion, and superstition than actual science.

We noted last week that in addition to the UK not requiring masks in schools (which went quite well, even amid a tough Delta surge), the European Union's CDC has also recommended against masking students under 12.  These decisions were made based on data and experience.  The question I asked in my post on the subject was whether or not President Biden, who is casting GOP officials as anti-science and anti-child, would say the same of our allied governments across the Atlantic.  I had the opportunity to put that exact question to a lefty on television last week, and his commitment to the narrative was so strong that he breezily declared that yes, everyone who disagrees with his tribe's made-up version of 'science' is part of the problem:

Question: Are the UK government & EU’s CDC “anti-science” and anti-child for not requiring masks in schools, based on their data?

The masking data he was falsely applying to children in schools is actually unsupported by any robust studies.  We'll revisit that in a moment, but our exchange elicited a number of super-sciencey 'rebuttals' like this:

We did a segment last night about mask mandates in schools, noting the data & science-driven decisions in Europe *against* the practice (https://t.co/xDpZTf4Omj)…and this is representative of some of the correspondence I’ve received about it. Persuasive & rigorous: pic.twitter.com/hg1yeBTLcT

I've discussed the data, or lack thereof, backing a policy of mandated masks in schools as best I can.  Here's another rigorous effort to assess this important question, written by David Zweig at New York magazine, very much not a conservative outlet.  What did he find in his deep dive?

Many of America’s peer nations around the world — including the U.K., Ireland, all of Scandinavia, France, the Netherlands, Switzerland, and Italy — have exempted kids, with varying age cutoffs, from wearing masks in classrooms. Conspicuously, there’s no evidence of more outbreaks in schools in those countries relative to schools in the U.S., where the solid majority of kids wore masks for an entire academic year and will continue to do so for the foreseeable future. These countries, along with the World Health Organization, whose child-masking guidance differs substantially from the CDC’s recommendations, have explicitly recognized that the decision to mask students carries with it potential academic and social harms for children and may lack a clear benefit. To date, the highly transmissible Delta variant has not led them to change this calculus. (Many experts I spoke with told me that while the Delta variant represents a major and concerning new development in the Covid pandemic, it probably shouldn’t change our thinking on a mask requirement for schools.)

The piece picks apart glaring problems with the methodology of the prevailing pro-child-mask study out of Georgia cited by CDC, effectively rendering it useless on reaching a scientific conclusion on the issue it purports to settle.  More:

After the CDC and the American Academy of Pediatrics issued their student-mask guidance last month, I contacted both organizations asking for the evidence or underlying data upon which they had based their recommendations. The AAP did not respond to multiple requests. The CDC press office replied that since children under 12 cannot be vaccinated, the agency “recommends schools do universal masking” and included links to unrelated materials on vaccines and a recent outbreak among adults. Over the course of several weeks, I also corresponded with many experts — epidemiologists, infectious-disease specialists, an immunologist, pediatricians, and a physician publicly active in matters relating to COVID — asking for the best evidence they were aware of that mask requirements on students were effective...Elissa Schechter-Perkins, the director of Emergency Medicine Infectious Disease Management at Boston Medical Center, told me. “But the world has changed, there are real downsides to masking children for this long, with no known end date, and without any clear upside.” She continued, “I’m not aware of any studies that show conclusively that kids wearing masks in schools has any effect on their own morbidity or mortality or on the hospitalization or death rate in the community around them.” Schechter-Perkins is just one of a number of top experts calling for this type of discussion — and raising questions about the CDC’s recent recommendations and what has become accepted conventional knowledge.

"While the protective value of a mask mandate for children in school seems, at best, uncertain, experts have concerns about the potential downsides of them in a learning environment," the analysis ultimately concludes, quoting a number of doctors and public health experts -- both on the record and on background -- pushing back against the dubiously-sourced CDC/AAP position.  Are these people also anti-science and anti-child, even as they highlight data and raise concerns about the well-being of children?  Also, as we craft public policies involving children, the threat of COVID to juveniles must be front and center.  Let's go back to the data:

Throughout 2020 and 2021, there have been about 3,500 COVID-related (not necessarily fully COVID-caused) hospitalizations of children in America -- total -- roughly 2,200 of which occurred among school-aged kids. There are approximately 75 million children in the country -- millions of whom attended schools all of last year, many without masks.  As for (vanishingly rare, to the point of nearly nonexistent) COVID deaths among Americans aged 0-17, last July's number (29) more than doubled this past July's (12).  We know that there are rising numbers of children in hospitals with COVID (again, not for COVID in every case) at the moment, but we also know that during the UK's Delta wave, hospitalization rates for juveniles were actually down from the Alpha wave.  I'll remind you that England has not been requiring masks for school children for months.  And yet American politicians refusing to blindly comply with sketchy CDC child masking guidance, which is an outlier in the West, are subjected to this sort of deranged insanity:

MSNBC Analyst Rips Gov. DeSantis For Covid School Policies: If He Were a ‘Foreign’ Governor, He’d Face Charges ‘At the Hague’ https://t.co/KgwgBub4Bt

As for adults and adolescents, I'll leave you with the former president encouraging Americans to take the vaccines developed under his administration, affirming that he himself got the shots:

“I recommend you take the vaccine. I did it.”pic.twitter.com/y83K0uK0Pq