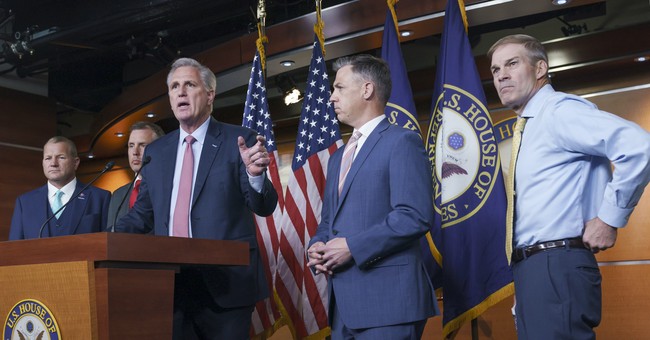 Earlier this month, five Republican congressmen were subpoenaed by the January 6 select committee, a stunning and significant move to be sure, considering the power hungry committee members had not yet subpoenaed their own members until that point. On Thursday, two of those members, House Minority Leader Kevin McCarthy (R-CA) and Rep. Jim Jordan (R-OH) wrote an op-ed published in The Wall Street Journal, charging that "The Jan. 6 Committee Is Weaponizing Majority Rule."

While McCarthy, Jordan, and others have long questioned the legitimacy of the select committee, there are a few specific concerns worth highlighting.

As the op-ed expressed concerns over, at issue is not just legitimacy but constitutional rights, not helped by the shadowy manner in which the select committee is conducting its affairs:

With no effective check on its power, the Select Committee is trampling on fundamental Constitutional rights. It is investigating the political speech of private citizens and demanding access to their personal records and private communications. When disputes over the requests arise, the committee refuses to engage and seeks to punish. There is no presumption of innocence; instead Chairman Bennie Thompson declared citizens who invoke the Fifth Amendment are “part and parcel guilty to what occurred.”

Rather than operating openly, the Select Committee is working behind closed doors and selectively leaking cherry-picked information. When it has presented some evidence in public, the committee’s been caught deliberately altering documents—including a text message pertaining to one of us—to malign conservatives.

One would expect this sort of inquiry from a banana republic, not from the U.S. House of Representatives. By subpoenaing us and three other Republican members, the Select Committee is escalating its abusive tactics. This attempt to coerce information from members of Congress about their official duties is a dangerous abuse of power, serves no legitimate legislative purpose, and eviscerates constitutional norms. Just because members of Congress are responsible for writing the laws doesn’t give a select few license to subvert them.

The op-ed is full of strong words to be sure, but such remarks actually have teeth to them as well. And there have been concerns before with the select committee, especially when it comes to committee members doctoring text messages.

When news broke on May 12 that the subpoenas were being issued, McCarthy and Jordan were at a loss for words initially on responding, as they told members of the inquiring press that they had not actually seen the subpoenas they were being questioned about.

Here's what the op-ed has to add to that:

In January, we sent the Select Committee letters in response to its request for interviews, raising good-faith concerns and seeking to protect the prerogatives of the House. Our letters went unanswered and unacknowledged for four months. The Select Committee now rushes to issue these unprecedented subpoenas in May, just in time for its pre-scheduled prime-time hearings next month.

And in case one doubts the political nature of this “investigation,” Rep. Adam Schiff sent a campaign fundraising email about the subpoenas before Republican members had even received them.

In case there's any question as to whether or not McCarthy or Jordan will comply, the op-ed mentions this as well:

Even if the Jan. 6 Select Committee was acting in good faith, we have no relevant information that would assist in advancing its legislative purpose. Democrats know this because we told them in January. We told them we can’t attest to Speaker Pelosi’s failure to secure the Capitol in advance of Jan. 6. We can’t elaborate on former U.S. Capitol Police Chief Steven Sund’s statement that a concern about “optics” contributed to the limited security response. And we can’t add to the bipartisan, comprehensive findings of the Senate investigative committee that were completed last year.

In closing, McCarthy and Jordan warn of future implications with complying with the "political stunt" propagated by the select committee:

For House Republican leaders to agree to participate in this political stunt would change the House forever. Every representative in the minority would be subject to compelled interrogations by the majority, under oath, without any foundation of fairness, and at the expense of taxpayers. The American people deserve better than Democrats’ weaponization of its majority rule.

On Friday afternoon, Leader McCarthy also released an 11-page letter from Elliot S. Berke, his attorney at Berke & Farrah LLP.  The letter is addressed to Chairman Bennie G. Thompson, a congressman from Mississippi.

The precipice of the letter appears to be that McCarthy is unwilling to comply because the select committee is not legitimate, a point which again, McCarthy has repeatedly made.

"As such, all valid and lawfully issued subpoenas must be respected and honored. Unfortunately, the words and actions of the Select Committee and its members have made it clear that it is not exercising a valid or lawful use of Congress’ subpoena power. In fact, the Select Committee is not even operating in compliance with the rules its own members voted to put in place," the letter reads early on.

McCarthy, as well as Jordan and Rep. Jim Banks (R-IN), have highlighted throughout the process the issue they have that no members picked by the minority party serve on the select committee. Leader McCarthy had named members to serve, but House Speaker Nancy Pelosi (D-CA) objected to Reps. Jordan and Banks, and McCarthy pulled his picks as a result.

Berke concludes by writing that "it is unclear how the Select Committee believes it is operating within the bounds of law or even within the confines of the authorizing resolution. However, in an effort to better understand how it is that the Select Committee believes it has the authority to request testimony in light of constitutional restrictions and the House-passed resolutions and rules," and then goes on to ask numerous questions.

Other questions seek to address the legitimacy by asking about who was consulted on the subpoenas.

Rep. Jordan was expected to comply today for a deposition, while McCarthy had until May 31.