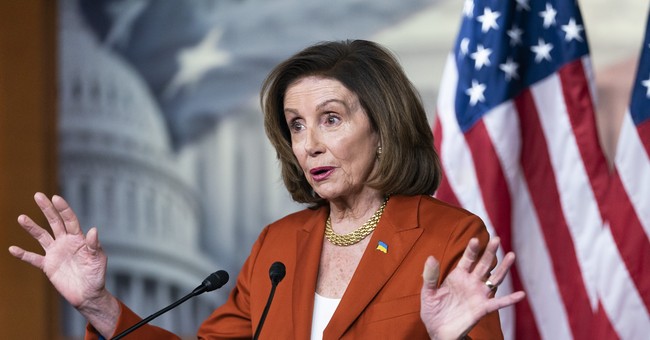 Democrats and their allies in the mainstream media have been freaking out over text messages from Ginni Thomas, the wife of Justice Clarence Thomas and a private citizen, for a week now, highlighting concerns to do with the January 6 Capitol riot. Before it was even confirmed that the justice had been released from the hospital, the Left was calling on him to resign or be impeached. This treatment isn't anything new, though. As House Speaker Nancy Pelosi (D-CA) reminded us herself during a Thursday press conference, her party has always treated Thomas poorly.

Reporter: "Do you agree with members of your caucus who are saying that Clarence Thomas should resign?"

Speaker Pelosi: "I don't think he should've ever been appointed." https://t.co/6kIK6fZ08n pic.twitter.com/kLwA0zhF3M

During the speaker's weekly press conference, a reporter asked "do you agree with members of your caucus who are saying that Clarence Thomas should resign?" Before giving a more substantive response, Pelosi candidly remarked "I don't think he should have ever been appointed, so let me take it back to there." She then thanked the reporter for his question, adding "I'm not gonna go to that," instead choosing to promote H.R. 1, which Democrats have billed as a so-called voting rights bill, but that in reality will lead to a federal takeover of elections.

Pelosi promoted H.R. 1 for the sake of a "code of ethics," claiming that the Supreme Court has "no code of ethics." She wants a hearing on that part of the bill "pretty soon," pointing out that the bill has already passed the House. It failed the Senate, though, due to the filibuster.

As it pertains to Justice Thomas and demands that he recuse himself from cases involving January or elections, Pelosi offered that "well, if your wife is an admitted and proud contributor to a coup of our country, maybe you should weigh that in your ethical standards."

Pelosi was referring to reporting, originally in The Washington Post and CBS News, of text messages between Ginni Thomas and Trump White House Chief of Staff Mark Meadows, in which Thomas urged Meadows to do more to challenge the 2020 election.

For all the hysteria that the Left has generated about January 6, however, no such successful "coup" occurred. The election was ultimately certified in favor of now President Joe Biden in the early hours of January 7.

When it comes to those Democrats calling on Justice Thomas to resign, there are perhaps no more memorable examples than those from Rep. Alexandria Ocasio-Cortez.

As Madeline covered on Tuesday, the squad member went on a long rant in several tweets, which included demands that Justice Thomas not only resign or be impeached but that "Inaction is a decision to erode and further delegitimize SCOTUS."

The disdain that liberals like Nancy Pelosi still have for Justice Clarence Thomas decades after his appointment and confirmation is pretty sad. https://t.co/m6R3BTBGsY

While such remarks from the speaker are indeed "pretty sad," as Paris Dennard, the RNC's National Spokesman and Director of Black Media Affairs tweeted, they're also illuminating.

Long before Democrats engaged in their 2018 character assassination against now Justice Brett Kavanaugh, they did it to Judge Robert Bork and now Justice Clarence Thomas. Then Sen. Biden was the one who chaired those Senate Judiciary Committee hearings.

Pelosi's remarks come not only after Thomas was recently released from the hospital last Friday, but after Judge Ketanji Brown Jackson's confirmation hearings also wrapped up last week. The same Democrats who tarnished the reputations of Republican nominees to the Supreme Court were lamenting the treatment of Judge Jackson at the hands of Republican senators who dared to question her record of lenient sentencing for sex offenders preying on children and caught with child pornography.