Poll: Biden Hemorrhaging Support Even Among Base 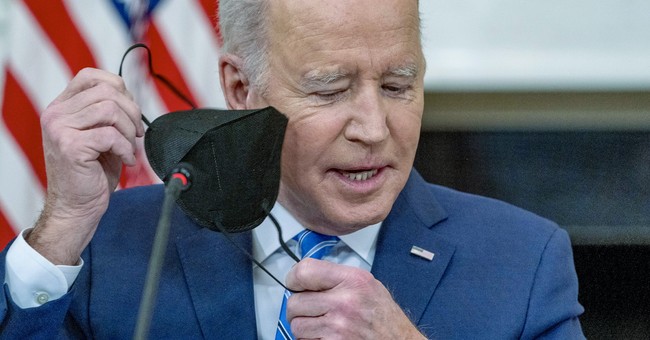 On Wednesday, Guy discussed a disastrous Pew poll that shows President Joe Biden is underwater on every issue according to the poll. Another point worth highlighting is the fact that Biden is performing particularly poorly among his base.

Republicans remain opposed to Biden, but it's the base that is really fleeing the president, which Pew highlighted as takeaway. There's also more uniformity among Republicans who don't think too highly of Biden, with 95 percent of Republicans and those who lean Republican saying they disapprove. However, just 68 percent of Democrats and those who lean Democratic say they approve of Biden. When it comes to those who consider themselves liberal Democrats, Biden's support is at 72 percent.

Biden’s standing has further slipped among members of his own party after declining in September. About three-quarters of adults who identify as Democrats (76%) say they approve of Biden’s performance – down 7 percentage points from the fall. There remains a wide gap in approval between Democrats and those who lean toward the Democratic Party. A narrow majority of Democratic leaners (56%) approve of the president’s job performance today, little different than in September.

The share of Democrats and Democratic leaners saying they approve of Biden’s job as president has fallen by 7 percentage points since September. Approval of Biden’s performance is down among both liberal Democrats (72% today vs. 80% in September) and conservative and moderate Democrats (65% vs. 71%)

It's not just Democrats and those who lean Democratic, though. Sixty percent of Black respondents approve of Biden, a number that was at 67 percent in September.

60% of Black adults approve of Biden’s job performance, down from 67% in September. This trend is the same among White adults, as the share who approve is down from 37% to 33% during the same period. https://t.co/85xXHKbdP3 pic.twitter.com/XmrRjozxTw

The poll was conducted January 10-17, with 5,128 U.S. adult panelists and a margin of error of plus or minus 2 percentage points.

Each poll brings with it bad news for Biden. In addition to Pew, and Harvard-Harris, which Guy also highlighted, there's the Monmouth poll that was released on Wednesday.

Like the Harvard-Harris poll, Biden has an approval rating of just 39 percent, while 54 percent disapprove. Last January, those numbers were at 54 and 30 percent, respectively. While such a poll shows 85 percent of Democrats support Biden, it's not as nuanced as the Pew poll appeared to be, and just 32 percent of Independents approve of Biden. That approval rating drops to 70 percent among Liberals.

The poll also shows that just 24 percent of respondents think the country is going in the "right direction," while 71 percent say it's on the "wrong track."

Biden received poor marks in the Pew poll on whether he can "Bring the country closer together," with 69 saying they were not confident, he could. Respondents in Monmouth don't think the president cares about him.

A plurality of respondents, at 47 percent, say Biden is "not really concerned" when it comes to "looking out for the economic wellbeing of average Americans."

The poll was conducted January 20-24 with 794 adults and a maximum margin of error of plus or minus 3.5 percentage points.