Chris Cuomo Has Been Fired 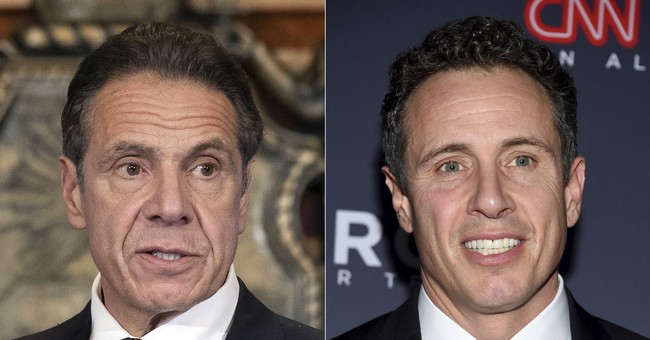 Just days after announcing Chris Cuomo had been "suspended indefinitely," CNN has issued a statement that he has been fired.

"Chris Cuomo was suspended earlier this week pending further evaluation of new information that came to light about his involvement with his brother's defense. We retained a respected law firm to conduct the review, and have terminated him, effective immediately," CNN said in a statement on Saturday, as reported on by CNN's Brian Stelter.

"While in the process of that review, additional information has come to light." Even though Cuomo has been fired, the statement noted CNN "will investigate as appropriate."

There was also some information not previously known that came to light as a result of the statement:

According to Saturday's announcement, the process included an outside law firm, a fact that was not previously known.

With information in the texts and documents pointing to a serious breach of CNN standards, Cuomo was notified of his termination on Saturday.

The CNN statement on Saturday also referred to "additional information [that] has come to light" during the review of the document dump. A CNN spokesperson declined to share any further detail about the information.

While CNN talks about a "serious breach of... standards," they didn't take enough action until now, as Matt discussed in his reporting. "When Chris admitted to us that he had offered advice to his brother's staff, he broke our rules and we acknowledged that publicly," a statement from the network regarding the suspension read in part.

Cuomo had been suspended while an internal review was being conducted for using his media connections to dig up information about women who had accused his brother, then Gov. Andrew Cuomo (D-NY), of sexual misconduct.

Just as an investigation from New York State Attorney General Letitia James found that the former governor had sexually harassed women in violation of state and federal law, evidence just recently came forth against Chris Cuomo.

James so happens to be running for governor of New York, with many pointing to the specific timing of it all. She just announced in late October, around the time it became known that Andrew Cuomo would be facing a misdemeanor sex crime charge, though his arraignment has been moved from November to January because the charge may be "potentially defective."

It's worth highlighting the irony of Stelter reporting on the statement announcing Chris Cuomo's firing. As Matt also reported earlier this week, Stelter predicted Cuomo could be back in January.

As Ben Johnson highlighted for The Daily Wire on Friday, CNN's highest-rated show, Cooper's, came in at 24th for the month of November.