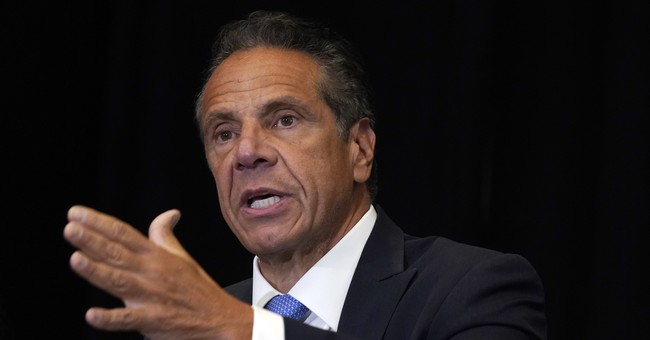 Last week I reported that former Gov. Andrew Cuomo (D-NY) was charged with a misdemeanor after a criminal complaint was filed in Albany City Court accusing him of "knowingly and intentionally the class A misdemeanor of Forcible Touching." He was due in court on November 17. As it turns out, though, according to reporting from The New York Times, the arraignment has been delayed until January 7 as the criminal complaint was found to be "potentially defective." In fact, the charge may even ultimately be tossed.

Breaking News: The sex-crime case against Andrew Cuomo was thrown into doubt after the Albany district attorney called the complaint “potentially defective.” https://t.co/KAprUaiWPJ

According to the report:

The sex-crime case against former Gov. Andrew M. Cuomo was thrown into doubt on Friday after the Albany County district attorney wrote an extraordinary letter to the court in which he characterized a criminal complaint as “potentially defective” because it did not include a sworn statement by the victim that would allow a prosecution to proceed.

In a letter to an Albany, N.Y., judge, the district attorney, David Soares, took issue with the Albany County sheriff for “unilaterally and inexplicably” filing the complaint last week without the knowledge of Mr. Soares, whose own investigation was still active.

Mr. Soares noted several potential problems with the sheriff’s filing, saying that the failure to include a sworn statement from the alleged victim, Brittany Commisso, was hindering the district attorney’s office’s ability to “proceed with a prosecution on these papers.”

Portions of Ms. Commisso’s testimony were also excluded, and Mr. Soares asserted that one part of the complaint misstated the relevant law.

Mr. Soares described portions of Ms. Commisso’s testimony that were not included in the complaint as “exculpatory,” meaning that the evidence could be favorable to Mr. Cuomo. Experts cautioned that could mean something as narrow as a statement being inconsistent.

Mr. Soares, a Democrat, asked the judge, Holly Trexler of Albany City Court, to delay Mr. Cuomo’s arraignment, which had been scheduled for Nov. 17, for 60 days “to reduce the risk of a procedural dismissal of this case” and to give the district attorney “time to continue with our independent and unbiased review of the facts in this case.”

Soares himself called it "even more troubling" that the sheriff’s filings "excluded other portions of her testimony where she described the very same acts described in the complaint."

Particularly relevant, and perplexing to even Commisso, is the lack of coordination from Sheriff Craig Apple, who, like Soares and Cuomo, is a fellow Democrat:

In the complaint filed by Sheriff Apple, Mr. Cuomo was charged with forcible touching, groping Ms. Commisso “for the purposes of degrading and gratifying his sexual desires.”

Yet the sheriff ’s abrupt decision to charge Mr. Cuomo with a sex crime caught Ms. Commisso, Mr. Cuomo and even Mr. Soares off guard. Mr. Soares had not indicated whether his office intended to prosecute the case and it had been unclear until Friday how the case would proceed.

Sheriff Apple, under immense pressure, defended his office’s decision to move ahead last week by insisting that his investigators had conducted their own inquiry and that it was not necessary for his office to coordinate with the district attorney on a misdemeanor charge.

Experts, however, said it was highly unusual for a sheriff’s office or a police department to pursue a charge without consulting with prosecutor who would be responsible for prosecuting the case.

Sheriff Apple’s handling of the complaint raised concerns that the complaint had been botched and led Mr. Cuomo and his allies to accuse the sheriff of being driven by political motivations.

In his letter to the judge, Mr. Soares said the sheriff’s complaint relied mostly on a portion of the testimony Ms. Commisso gave to investigators from the state attorney general’s office this year as they scrutinized sexual harassment claims against Mr. Cuomo.

Cuomo last tweeted on October 31, which included a link to a Wall Street Journal editorial, "The Curious Andrew Cuomo Complaint."

“The timing of the announcement, combined with the lack of a DA commitment to prosecute the case, creates an appearance of political calculation. No one is above the law, but politicized charges degrade the justice system.”https://t.co/QxAhyL7HHx

Another tweet that same day linked to a three page letter signed by "Team Cuomo," explaining how "Sheriff Apple and [New York Attorney General Letitia] Tish James have epitomized the worst combination of politics, incompetence and abuse of the law."

“In the last 72 hours, Sheriff Apple and Tish James have epitomized the worst combination of politics, incompetence and abuse of the law.”

Read the full letter outlining the lack of evidence and absurdity of “December 7” here ????https://t.co/OfrWLhOG4h

The charge was reported just as James herself announced she is running for governor as a primary challenger to Gov. Kathy Hochul, who served as Cuomo's lieutenant governor and took office once his resignation went into effect on August 24, 2021. An independent investigation from Cuomo found that he had sexually harassed multiple women.