Dems in Full Panic? DNC to Pump Their 'Largest Ever Investment in Virginia' 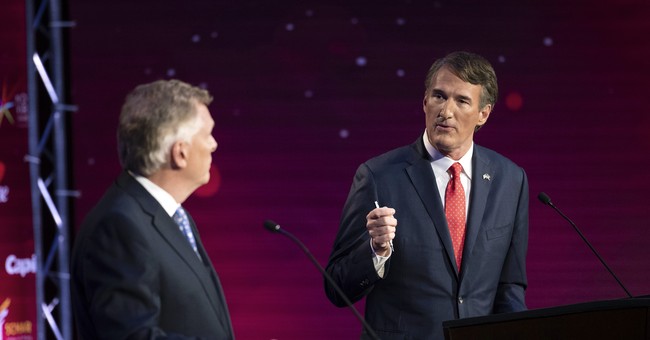 Less than three weeks away from Election Day 2021, the Democratic National Committee (DNC) is launching what a press release from Thursday morning refers to as a "New Constituency Ad Campaign" to elect Democratic nominee Terry McAuliffe. Tellingly, the very end of the press release notes [emphasis added]:

Virginia has been considered a blue state by some, as it hasn't elected a Republican to statewide office since 2009, and President Joe Biden defeated former President Donald Trump in 2020 by ten percentage points. In fact, Virginia has voted for the Democratic candidate for president since 2008.

If Virginia is so blue, why do Democrats feel the need to engage in their "largest ever investment" there?

Here are more details about the ad campaign, as explained in the press release [emphasis added]:

Today, the Democratic National Committee (DNC) is announcing new ads in Virginia highlighting Terry McAuliffe’s experience and record of creating good paying jobs, making health care more affordable and giving every child a world-class education versus Glenn Youngkin’s Trumpian agenda that he will bring to Virginia. The ads will run on Spanish-language and Black radio stations in the Washington DC, Richmond, and Norfolk media markets, in addition to AAPI print outlets in Northern Virginia.

Northern Virginia, because it is so close to Washington, D.C., is especially a Democratic stronghold, though the early voting numbers are significantly lower in this region than they were in 2017 when Democratic Gov. Ralph Northam ultimately defeated Republican Ed Gillespie by nearly nine percentage points.

“With less than a month to go until election day, the DNC is committed to ensuring that every voter in the Commonwealth understands what is at stake in this race,” said DNC Chair Jaime Harrison. “The choice is clear: Virginians will be supporting Terry McAuliffe because he has a real plan to create jobs, end this pandemic and give every Virginia child a world-class education. Meanwhile, Glenn Youngkin would ban abortion, deciminate [sp] funding for public schools and bring Donald Trump’s agenda to Virginia.”

Claims that Youngkin "would ban abortion" have been oft-repeated lines by McAuliffe as well, though both The Washington Post and PolitiFact fact-checkers have been clear that such a claim is not entirely true.

And, when it comes to the claim that Youngkin would "deciminate [sic] funding for public school," these appear to be based on what McAuliffe has referred to as "independent reports." Following the first debate last month, though, PolitiFact noted that such groups are not considered "independent" and that these reports are based upon a since clarified statement from Youngkin, who said he does not plan on repealing Virginia income tax after all.

Harrison is also following McAuliffe's lead in his preoccupation with Trump. As Matt reported, McAuliffe does get testy when he's questioned on whether or not he's equating Youngkin to Trump too heavily, and by CNN no less.

"@TerryMcAuliffe has made this entire race about Donald Trump...@GlennYoungkin has been running a campaign focused on kitchen table issues, and it’s resonating." #WinWithGlenn pic.twitter.com/FtUFY72ZE2

Only 16 times in today's interview? C'mon @TerryMcAuliffe, your record is 18. Can you beat it? pic.twitter.com/549UUxOR4t

When one goes to the DNC website, they are immediately greeted by an announcement that "VIRGINIA AND NEW JERSEY NEED YOU!" A conversation bubble calls upon visitors to the website to "TALK TO VOTERS WITH THE DEMOCRAT'S NATIONAL CALL CREW." New Jersey is the only other statewide election in the off-year. Incumbent Democratic Gov. Phil Murphy currently leads his Republican opponent, Jack Ciattarelli, 48.7 percent to 40.3 percent.

Also, this is truly a hilarious typo from @harrisonjaime. Look, we all make mistakes, but this doesn’t mean what you think it means… the word they are looking for is “decimate.” Further, “deciminated” is not actually a word. pic.twitter.com/krKaDpUxmR

Just a few minutes past 12pm EST, over the course of ~4.25 hours, I’ve gotten FOUR emails from @DNC, one being a forwarded email from @vademocrats. All are to do with #VAGov race. ?????? pic.twitter.com/FUg9TzgrzU

The polls have tightened significantly as the race gets closer. Some polls, such as the recently released one from Emerson College, show McAuliffe and Youngkin in a statistical tie.

According to poll tracking from RealClearPolitics (RCP) over the past few weeks, the most McAuliffe leads by is five percentage points, with a Monmouth poll from September 22-26. In contrast, RCP points out that Northam led by 8.9 percentage points.

During a Tuesday appearance on MSNBC's "Meet the Press," McAuliffe announced that former President Barack Obama was coming to campaign on his behalf. Host Joe Scarborough clarified that Obama will be coming later this month. For this upcoming weekend, First Lady Jill Biden will come to campaign, as well as former Georgia gubernatorial candidate Stacey Abrams.

Townhall was also present at a press gaggle later on Tuesday where McAuliffe said "he'll be coming" in reference to President Joe Biden. While the president campaigned for McAuliffe in July, Biden's approval numbers have gone significantly down since then, in Virginia and across the country. McAuliffe himself admitted Biden "is unpopular today unfortunately here in Virginia."