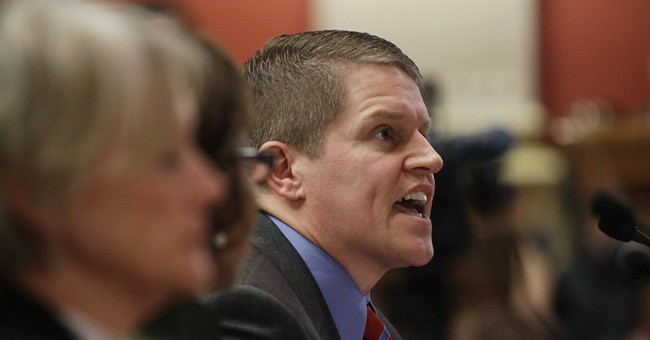 More accusations of racism have come out against embattled ATF nominee David Chipman. Stephen Gutowski reported Wednesday morning for The Reload that a "black ATF agent says Biden nominee falsely accused him of cheating on promotion assessment." This revelation comes weeks after a previous report from Gutowski, which mentioned similar accusations, suggesting a concerning pattern.

The former agent in question, who spoke to The Reload, realized there was a similarity between what he says he experienced and other reports from an alleged Equal Employment Opportunity complaint:

He said he believes Chipman’s allegation after the in-person test was motivated by race.

“I believe it had to have been a bias,” the agent, who spent more than 25 years at the agency, said. “My answers were just ‘too good.’ And my thought is he just said, ‘this black guy could not have answered this well if he wasn’t cheating.'”

The agent remained at the ATF for a few years after [the Office of the Inspector General] cleared his name. But he never again attempted to move into management before leaving the agency altogether.

“It was a long career, and I enjoyed my career,” he said. “It really wasn’t until later in my career that I said, ‘Okay, maybe I’ll look at mid management’ because I had a lot of field and supervisory experience and program management experience. And I love that stuff. I thought, ‘Maybe I can do this until I plan to retire.’

“But that didn’t come to fruition because of Mr. Chipman.”

According to the agent on what happened:

He said the assessment in question happened in Dallas, Texas, and he was put through a series of tests to judge how well he could handle a management position.

“They would fly agents to these cities for three or four days. And two of those days were the assessments that you’d go in, and it was role-playing. You’d have a number of different scenarios.”

The agent said Chipman and [William] McMahon were on the panel for his test on how to use agency resources to combat rising gun crime in a given city.

“One of those was about anti-violence programs,” he said. “‘Hey, we got XYZ city, you’re the Assistant Special Agent in Charge over this division, and this particular city has seen a high increase and gun violence, there’s a lot of trafficking and this and that. Walk us through, how would you put into place a program to address that issue.’ So, that was the scenario. And my explanation was everything that I did from when I managed a tracing program. The stuff that I would do for Chicago PD, or NYPD, or Mobile, Alabama police. I traveled all over the country. That was my job. I had a team. We would travel, put in place these strategies, and train the police department to do these types of investigations and use our resources. And, at that point, I had already run an office for years. I’m like, ‘Okay, this is easy.’ Out of all of them, I know this stuff.”

He said his overall score was competitive but not outstanding. However, he said Chipman wasn’t aware of his background in setting up anti-violence programs and did not observe the other sections of his assessment. He said Chipman’s assessment he performed too well on a single test led him into a two-year ordeal that handicapped his career.

“It was a little above average, but it wasn’t like a great score. It wasn’t like I aced this thing,” the agent said. “Based on that one area, he made the comment.”

He said once the allegation was made, it had to be investigated even though his direct supervisors were skeptical of the claim.

“They were very supportive because they knew me, and they knew him,” the agent said. “But they had no choice. They had to do it at that point.”

The Reload has corroborated the story of that agent with a second ATF agent as well as with the DOJ over how there was an accusation against Chipman:

The agent asked not to be identified as he does not want his family to be brought into the political spotlight while they deal with unrelated medical struggles. The Reload independently confirmed the agent’s identity and position within ATF by examining multiple press reports mentioning him during his career with the agency. A second former ATF agent with more than 30 years in government service vouched for the first agent’s credibility.

“He’s one of the most sincere and well-balanced people I know,” the second ATF agent, who also asked not to be named, told The Reload. “He’s a solid professional. I would trust him with my life.”

The second agent also corroborated several details of the story. He confirmed the first agent told him of the complaint during his assessment around the time it first happened. He said he was also told the DOJ’s Office of the Inspector General (OIG) was investigating the allegation.

Dena Iverson, principal deputy director of DOJ’s Office of Public Affairs, confirmed Chipman had accused an agent of cheating on an assessment. She said the accusation did result in an investigation but did not say what the results of the investigation were and DOJ did not release a copy of the report.

“Chipman served as an assessor for many ATF candidates of all backgrounds–and only once, in 2007, raised a concern about potential cheating by an individual to supervisors,” Iverson told The Reload. “Those concerns were considered serious enough that the inspector general decided to investigate them.”

“Any allegations of bias against David Chipman are false,” Iverson said, “and in the two times he was the subject of a workplace complaint over a 25-year career at the ATF, the claims were thoroughly investigated and found to be meritless.”

Not only did the agent experience what he believes was a racially motivated accusation, but his career was affected by an investigation, even after he was cleared by the Department of Justice (DOJ):

The agent said he was cleared by a Department of Justice (DOJ) investigation, but not before his career took a hit. He said the protracted investigation effectively paused the promising career he’d built.

“I was cleared as I should have been,” the agent said. “But it was very painful because it was two years out of my life where my career was sidelined for something like that. And it caused me a lot of stress and my family a lot of stress. And it kind of disenchanted me with the idea of management.”

Ultimately, the agent said he was satisfied with the outcome of the investigation.

“It had to go the formal investigation route,” he said. “I’m glad it did because that resulted in the clearance. And no one can ever say, ‘hey, he might have done it.’ Hell no, I didn’t do sh**. I was cleared.”

But that doesn’t mean he enjoyed the ordeal, and he still resents being accused of cheating over being able to answer questions that dealt with areas of his job he had years of experience carrying out. In fact, he said the accusation did more than just surprise him—it also filled him with righteous indignation.

This is the latest revelation about Chipman, but far from the only concern when it comes to this nominee. In addition to charges of racism, Chipman has denigrated gun owners, and he's also had a bizarrely broad definition of assault weapons.

Last week a video from Sen. Ted Cruz (R-TX) highlighted these concerns and an additional one to do with an appearance Chipman made on China Global Television Network. His comments made in 2012 with regards to the Sandy Hook Elementary School shooting, that there would be more shootings "unless we do something about it," were used as propaganda to distract from a stabbing at a school in China's Henan Province.

Despite all of these concerns and requests from Republicans to hold another hearing, Sen. Dick Durbin (D-IL), who chairs the Senate Judiciary Committee has said no to holding more hearings.