Ronna McDaniel is Hopeful and Determined About 2022, Reminds Us That Trump 'Still Leads the Party' 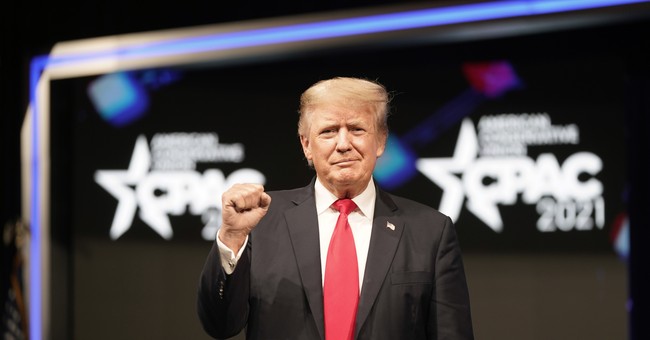 On Sunday, RNC Chairwoman Ronna McDaniel appeared on John Catsimatidis' radio show, "the Cats Roundtable." She reminded listeners that it's still former President Donald Trump's party when asked "whose Republican party is it." Catsimatidis said it's "the other question that comes up," in addition to what's going on for 2022.

McDaniel cited rally attendance as well as Trump'd fundraising abilities. She emphasized that she thinks "Republicans in America would absolutely say the president's the most popular Republican and still leads the party."

.@GOPChairwoman - Republicans will win the 2022 elections both Senate and House.https://t.co/3ZY6hCXjNd

Reporting for The Hill, Caroline Vakil focused on McDaniel's comments about Trump. Such remarks aren't entirely surprising, though, and they only took up a few seconds of the interview, which was over five minutes long. The former president still has great influence over the party, not just because of his fundraising appeal, and not just because he's teased a run for 2024, though McDaniel did not address this latter part on the show.

There are polls which address what adults think about Trump running in 2024, and a plurality think he will. Past polls have also indicated Republican voters think Trump represents their views, particularly when it comes to a CBS/YouGov poll from May.

McDaniel did discuss other matters, too. Catsimatidis began by reminding listers that when it comes to how "there's so many things going on, the first thing on everybody's mind about 2020 versus 2022 [is] election integrity."

In promoting voter ID as "part of the election integrity process," McDaniel pointed out that a majority of Americans support showing ID to vote. Other "commonsense measures being put in place" include "bipartisan poll watchers, security at drop boxes, [and] getting rid of ballot harvesting." She emphasized that showing ID is "of course the most important" measure.

She also mentioned that the RNC is already involved in 19 lawsuits to defend voter integrity lawsuits across the country. As Reagan reported previously, this includes the Department of Justice's lawsuit against the state of Georgia for a law Gov. Brian Kemp signed into law in March.

While acknowledging "I know we don't always feel that it was so great" when it comes to 2020 McDaniel referenced a "great highlight" from that year was that Republicans gained so many seats in state legislatures, which included flipping three chambers. This amounts to a majority of Republican legislatures in the country.

Republicans did not lose one incumbent seat in the U.S. House of Representatives, but rather picked up seats, which provides further hope that the GOP will regain control of the House.

In addition to redistricting, which McDaniel said is "huge right now," the "American people are so mad," on issues such as inflation, open borders and the border crisis, defunding the police, Critical Race Theory, which the chairwoman says "is going to give us a great platform to win in 2022."

Weighing in on Biden's presidency thus far, McDaniel said "it's been all ugly" and "we are in such bad shape," and "a catastrophe what's happening in our country" under Biden, especially in comparison to a Trump presidency which gave us such record low unemployment levels, the vaccine, and a different situation at the border.

In her closing remarks, McDaniel encouraged people to "get out and vote," as "our country's at stake." As she reminded listeners, though, "it's not just Democrat versus Republican, but rather Republican versus Communism," leading us to not being able to "recognize America if we don't win this next election."