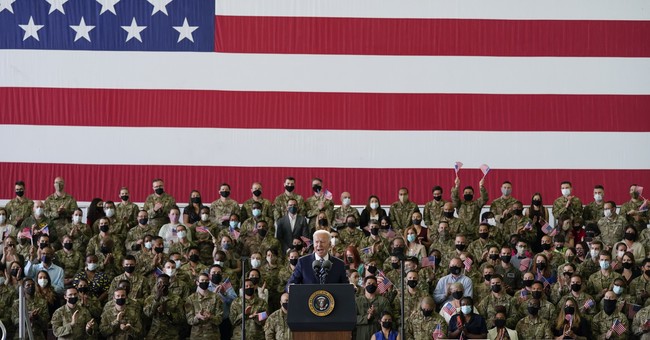 On Wednesday, while President Joe Biden was speaking before Air Force personnel in the United Kingdom, he had quite the senior moment, which is not atypical for the 78-year old. As the president began his remarks, it took him a moment before he realized that the military personnel in attendance were still standing, as he had not told them to sit down. He had already started telling a story when he noticed.

"Please, at ease," Biden said. "I keep forgetting I'm president," he told the crowd. The service members did as they were told and sat down, while there was laughter over the so-called joke.

This is not the first time that Biden has forgotten he's president, and it won't be the last.

Not even Joe Biden seems to think he's running the show. In March, he spoke about how "President Harris and I took a virtual tour of a vaccination center in Arizona not long ago..."

In late December, just before his administration had taken office, Biden referred to Kamala Harris as the "president-elect." In September, he had also talked about the "Harris-Biden administration."

Also, during the campaign trail, Biden made all sorts of gaffes and had all sorts of memory slips, as he mixed up key facts like what office he was running for, and what state he was in.

President Biden also said "RFA" when he meant "RAF," for Royal Air Force. As one can see from the official White House transcript:

These partnerships have hardened and have been hardened in the fire of war, and generations of Americans and service members who fought them, like the original Bloody Hundredth and those RFA [RAF] pilots, and their shared mission in World War Two — flying, fighting, winning.  It was done together.

There was another part of the president's remarks just as absurd, which Leah reported on. When it came to warning about how climate change was the "greatest physical threat," Biden had to clarify "this is not a joke."