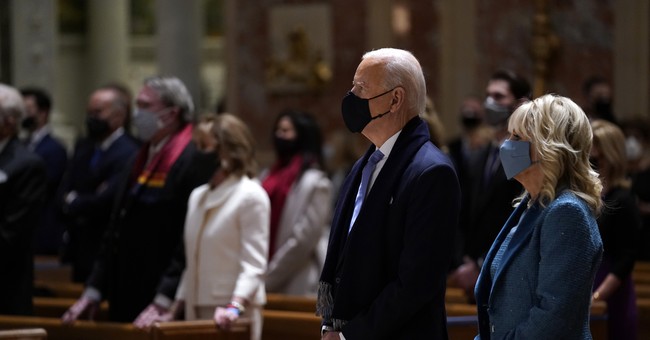 On Wednesday, AP's David Crary reported that "US Catholic bishops may press Biden to stop taking Communion." Though President Joe Biden is the second Catholic president, and he, along with his supporters has touted his "devout" faith, he not only is publicly pro-abortion, but his administration is the most pro-abortion one our nation has seen. And he's only been in office for 100 days.

As someone who publicly subscribes to the Catholic faith, President Biden must not publicly advocate for abortion so publicly. It's not a matter of division, but rather of a unifying message.

Crary's article is full of statements from Catholic leaders and professors:

Such a stance, by a public figure, is “a grave moral evil,” according to Archbishop Joseph Naumann of Kansas City, Kansas, who chairs the USCCB’s Committee on Pro-Life Activities and believes it’s necessary to publicly rebuke Biden on the issue.

“Because President Biden is Catholic, it presents a unique problem for us,” Naumann told The Associated Press. “It can create confusion. ... How can he say he’s a devout Catholic and he’s doing these things that are contrary to the church’s teaching?”

As I covered earlier this month, critics, including those who affiliate as Christians, have tried to stir up trouble for the archbishop. Naumann gained attention for an interview he gave for the Atlantic with Emma Green, which was published on March 14. In it, he lovingly but forcefully clarified how the president's support for abortion goes against the Catholic faith.

While the archbishop did share areas where Biden is indeed properly living out the faith, it must be underscored that abortion is a particular focus for the Catholic Church and always has been.

Another statement Crary included in his piece included:

“There’s a growing sense of urgency,” said San Francisco Archbishop Salvatore Cordileone. “Abortion is not just one among many important issues. ... It’s a direct attack on human life.”

Cordileone envisions a statement from the USCCB to Biden and others “that would move them in their conscience.”

“They need to understand the scandal that is caused when they say they are faithfully Catholic and yet oppose the church on such a basic concept,” he said.

The process will be handled during a national meeting held by the U.S. Conference of Catholic Bishops (USCCB) in June. A document will be prepared by the Committee on Doctrine, specifically to do with reminding and clarifying the Church's stance on abortion, especially when it comes to America's most well-known Catholic as the President of the United States. That being said, it will be up to bishops to decide, who do have a role in reminding the faithful of Church teaching as part of their duties of ministering to the flock:

In accordance with existing USCCB policy, it would still leave decisions on withholding Communion up to individual bishops. In Biden’s case, the top prelates of the jurisdictions where he frequently worships — Bishop W. Francis Malooly of Wilmington, Delaware, and Cardinal Wilton Gregory of Washington, D.C. — have made clear that Biden is welcome to receive Communion at churches they oversee.

The document-in-the-works results from a decision in November by the USCCB’s president, Archbishop José Gomez of Los Angeles, to form a working group to address the “complex and difficult situation” posed by Biden’s stances on abortion and other issues that differ from official church teaching. Before disbanding, the group proposed the drafting of a new document addressing the issue of Communion — a project assigned to the doctrine committee.

A two-thirds majority would be needed for work to proceed, Naumann said. But even critics of the initiative, such as Bishop John Stowe of Lexington, Kentucky, predict the endeavor will win overwhelming approval.

Another Catholic cited in the piece includes Professor Margaret McGuiness, who teaches religion at La Salle University, a Catholic university in Philadelphia:

“Are you really going to deny Communion for the president of the United States?” asked Margaret McGuinness, a religion professor at La Salle University in Philadelphia. “I don’t think this is going to shake his faith. ... I don’t see anything constructive coming out of it.”

She noted that a majority of U.S. Catholics, according to polls, say abortion should be legal in at least some cases.

While McGuinness is correct about poll results, and it is certainly something important for the bishops to address, President Biden, is not just some "U.S. Catholic." His administration also doesn't just support abortion "in at least some cases." He is a public figure whom people look up to, and in not just supporting but advocating for pro-abortion policies, from the signing of executive orders and laws to statements and legislative priorities, he is creating what the Church considers a scandal in how he misleads on Catholic teaching.

President Biden has systematically worked against the pro-life cause, and in light of his policies, both planned and implemented, it's safe to say he's not just pro-choice, but also "anti-life and very pro-abortion." @SteveDaines https://t.co/kFkmGwbweg

Other pro-life Catholics have weighed in on this issue. Michelle Boorstein's reporting for the Washington Post included a statement from Brian Burch, President of CatholicVote, which organized the letter in support of Archbishop Naumann's backlash following that March interview:

“Officials who repeatedly declare by their actions that they are not in communion with the church, especially on matters of grave moral import, create confusion and division. Nobody celebrates a Catholic who chooses to separate themselves from the church. But when they do, we can’t pretend as if the disunity does not exist,” Burch said. “Any religious institution risks its own credibility and integrity if it allows its adherents to flout its core teachings.”

American Life League also provided a statement to Townhall. Hugh Brown, the executive vice president of the Catholic, pro-life organization echoed and expanded upon points made by the likes of Archbishop Cordileone, with original emphasis:

Scripture tells us that some sins are worse than others. Supporting the murder of children is death to the soul. Joe Biden has unapologetically and with malevolence of intent dedicated his life to deception. Sadly, that deception has helped facilitate and empower the culture of death.

American Life League has been asking the Catholic Church to enforce Canon 915 for many years. But, sadly, too many Catholic bishops who know better squabble, quibble, and create cover for the culture of death by hiding behind terms like “common discernment,” “proportionate reasoning,” “collegiality,” and “Eucharistic coherence” while 3,000 children die each day. In the process, souls have been lost, confusion dominates, faith is shaken, and the anti-church and her cronies are empowered.

The Catholic bishops need look no further than the official statement of Cardinal Joseph Ratzinger (now Pope-Emeritus Benedict XVI) to know what they should have been saying to Biden for many years. Ratzinger taught: Regarding the grave sin of abortion or euthanasia, when a person’s formal cooperation becomes manifest (understood, in the case of a Catholic politician, as his consistently campaigning and voting for permissive abortion and euthanasia laws), his Pastor should meet with him, instructing him about the Church’s teaching, informing him that he is not to present himself for Holy Communion until he brings to an end the objective situation of sin, and warning him that he will otherwise be denied the Eucharist.

It is long past time for the bishops to stand up and defend Christ rather than play politics.

Our hope rests in Christ Himself. We pray that the Holy Spirit raises up more shepherds who heed the words of St. John Paul II, who warned in 1976 that this is a trial “the Church must take up and face courageously.”

Crary touched upon Cardinal Ratzinger's perspective in his piece as well.

While there is sure to be outrage from President Biden's supporters, including and especially other pro-abortion Catholics, the administration can't be entirely surprised.

As Leah reported on Wednesday, White House Press Secretary Jenn Psaki shared during a press briefing that Biden "respectfully disagrees" with a statement from the USCCB which condemned the administration's move to reverse a decision from the Trump administration prohibiting taxpayer-funded experiments on aborted fetal body parts in the name of research.