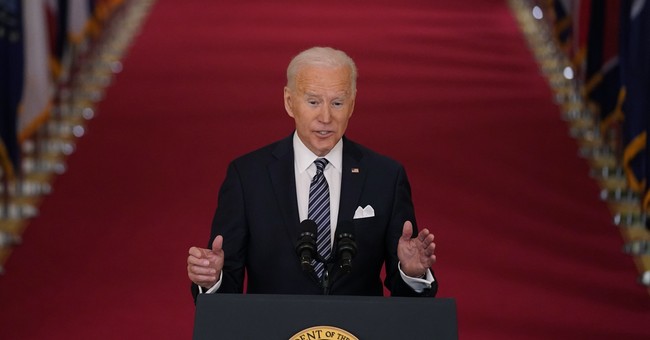 President Joe Biden addressed the nation on March 11 in his first time primetime address, a year after COVID-19 was declared a pandemic. Biden didn't take any prepared questions afterward; he also ignored a shouted question following his address.

While Biden did not call Trump out by name to trash him, that didn't mean there weren't other lines of attacks. More pronounced, however, is that Biden may very well be seeking to erase all memory of the progress his predecessor made with the vaccine.

President Biden spoke about the "vaccine" no less than 17 times, but not once did he mention Operation Warp Speed. He didn't discuss President Trump by name, either, but he did point out that "two months ago, this country did not have nearly enough vaccine supply to vaccinate all or nearly all of the American public." Perhaps Biden ought to keep in mind that we only have vaccines in the first place thanks to his predecessor.

He noted that the vaccine manufacturers, "competitors have come together for the good of the nation, and they should be applauded for it." Biden can't do the same for his competitor.

Biden clearly thought he was hot stuff in reminding the American people about his vaccine plan:

When I came into office you may recall I said the goal that many of you said was kind of way over the top. I said I intended to get 100 million shots in people's arms in my first 100 days in office. Tonight I can say we are not only going to meet that goal, we are going to beat goal because we are on track to reach this goal of 100 million arms on my 60th day in office. No other country in the world has done this. None.

Again, we'll say it louder for the people in the back: we have the vaccine thanks to the Trump administration's efforts with Operation Warp Speed. It's because of Trump that Biden can brag all he wants about "a goal that many of you said was kind of way over the top." Besides, it's not even "a goal" worth bragging about, considering how lousy it is.

It was once thought that having the vaccine at this rate at all would be "way over the top." Trump made it happen anyway, though, a true "medical miracle."

While Biden congratulates himself for his plans being "months ahead of schedule," Trump's plan was years ahead of what it could have been.

Why does this need such emphasis? Because if you ask the Biden Administration, it's Biden who is to thank for collaboration between Merck and Johnson & Johnson to get those vaccines rolling.

Biden, who has received both doses of his vaccine, and who still insists on wearing two masks and maintaining social distancing, referred to "a mask" as "the easiest thing to do to save lives," also pointed out that "sometimes it still divides us." He even went on to say that "states pitted against one another instead of working with each other."

Oh, so now it's about "working with each other," when Biden is giving his first national primetime address? Because just some days ago, Biden called out states for their "neanderthal thinking" for making the decision to open their states up "completely," including Texas' Gov. Greg Abbott and Mississippi's Gov. Tate Reeves. While Connecticut also had some relaxed mandates, their governor, Ned Lamont, is a Democrat, so no name-calling there.

While most, if not all, of Biden's speech, had the reality of an ominous tone under any attempted optimism, his closings were particularly problematic. Towards the end, Biden in part mentioned:

There is something else we lost. We lost faith in whether our government and our democracy can deliver on really hard things for the American people, but as I said here tonight, we are proving once again I said time and time again. You're probably tired of hearing me say it. I say it to leaders and domestic like, it is never a good bet to bet against the American people.

Such is a mighty bold claim from Biden, especially when he doesn't trust the American people or the states. If we've "lost faith in... our government," Biden is just as much a reason for it.