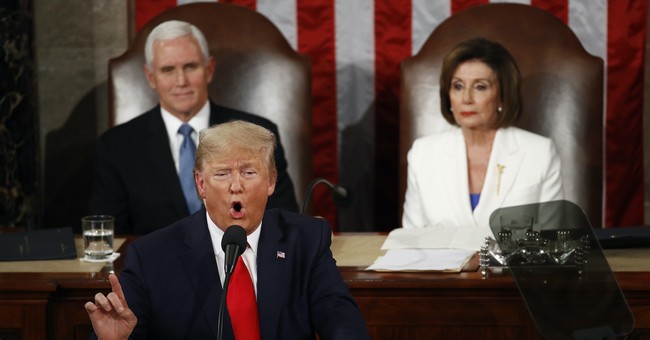 President Trump delivered his third official State of the Union address from the House chamber Tuesday evening, and touted his stellar record on the issues across the board. Trump also packed the chamber with worthy guests, including Ellie Schneider and her mom Robin Schneider.

Ellie, 2, was born at just 21 weeks gestation. President Trump honored Ellie, the bravery of her parents and the talent of her doctors. He also hailed Ellie as a shining reminder that every human life has intrinsic value.

“Every child is a miracle of life,” President Trump said.

Ellie Schneider was born at just 21 weeks and six days—one of the youngest babies to survive in the U.S.

She kept beating the odds, exceeding milestones, and fighting for life.

Today, Ellie is a healthy 2-year-old who brings endless joy to her mother, Robin & her entire family. pic.twitter.com/FIBHltaBm9

President Trump then pivoted to the radical abortion stance embraced by mainstream Democrats, much to the dismay of Speaker Pelosi. He even called for a ban on late-term abortion, which is certainly common sense legislation.

BREAKING: President Trump calls on Congress to ban late-term abortion during his State of the Union address. He points to the witness of 2-year-old Ellie, who survived being one of the earliest premature babies born at 21 weeks and 6 days. #SOTU pic.twitter.com/i6IFO0OXa1

President Trump was brilliant to tout his pro-life commitment at this State of the Union address ahead of the November general election. It is certain that President Trump has been the most pro-life president Americans have seen since former President Ronald Reagan.