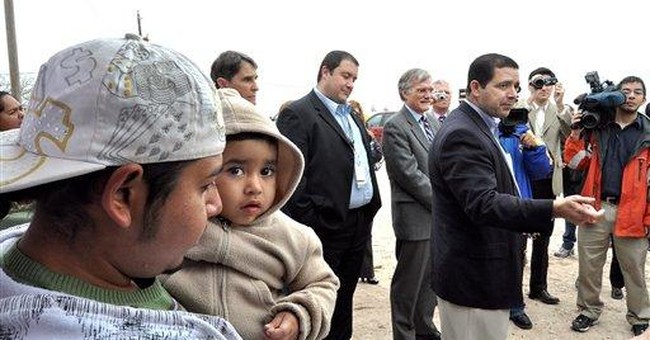 What's going on at Rep. Henry Cuellar's (D-TX) home? I only ask because it was swarmed by FBI agents yesterday. We don't know why it was searched. We don't know the details, but the border Democrat has been a vocal critic of the Biden administration's immigration policy.

Our own Julio Rosas has written plenty about Cuellar taking this White House to task for being braindead about this whole situation. He also slammed Kamala Harris' little trip to Latin America, and rightfully so—what did that even accomplish? He also penned a scathing letter last June pleading with her to get with the program on the border. Visiting it might be nice, you know. Cuellar's district encompasses a significant portion of our southern border with Mexico. He's a Laredo native, and now FBI agents are sifting through his home for reasons unknown (via Breitbart):

“The FBI was present in the vicinity of Windridge Drive and Estate Drive in Laredo conducting court-authorized law enforcement activity,” the FBI revealed in a prepared statement. “The FBI cannot provide further comment on an ongoing investigation.”

Federal authorities did not reveal a motive for the raid. The raid was first reported on Wednesday afternoon by Valerie Gonzalez from The Monitor. According to The Monitor, Cuellar lives on the 8200 block of Estate Drive, which is near the corner with Windridge Drive.

"Cuellar [a Democrat], considered a moderate, has been a frequent critic of Biden’s lax immigration enforcement policies, which experts say have contributed to the explosion in illegal immigration recorded since Biden took office one year ago."https://t.co/CGfalZum6p

Rep. Henry Cuellar has been the most outspoken member of Biden's party, calling for the administration to resolve the border crisis

Last night, we learned the FBI raided his home and campaign office in border town of Laredo https://t.co/nJCDKv6Dww #fbi

We'll keep you updated, but you know how Democratic DOJs treat their political enemies. Donald Trump knows full well from the leftover officials he allowed to remain at the DOJ when he took office. They engaged in a years-long campaign to destroy him. It's still ongoing.

Cuellar said he is cooperating fully with this investigation.