Why Meghan Markle Is Being Trashed By the Press Again 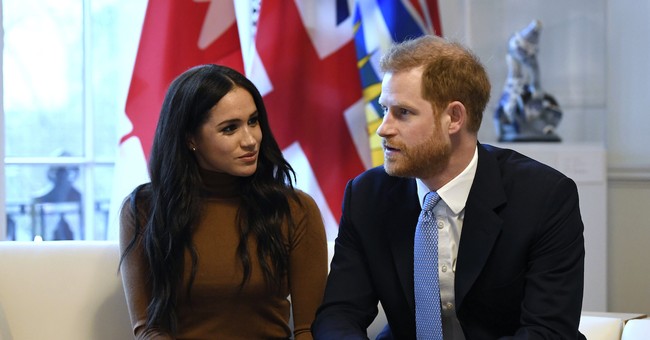 Prince Harry and Meghan Markle are back in the news somewhat because the Duchess of Sussex has a new children's book—and it's reportedly awful. It was butchered by critics who labeled it "semi-literate" (via Fox News):

The Telegraph's Claire Allfree held nothing back in her one-star review, questioning the premise of Markle's book. On one of the pages, a red-haired father meant to depict Prince Harry is seen playing with their son while Markle watches from inside their house. The image is accompanied by the words, "Looking out at My Love and our beautiful boy. And here in the window I'll have tears of great joy."

"Poor Harry's role in this marriage is to sit on his bench holding the baby while Meghan gets on and conquers the world, one act of compassion at a time," Allfree wrote.

"One wonders how any publisher could have thought to publish this grammar-defying set of badly rhyming cod homilies, let alone think any child anywhere would want to read it," she wrote. "But that's planet Sussex for you, where even the business of raising a family is all about the brand."

The Telegraph wasn't the only outlet to question which audience Markle was trying to target.

"It reads as if it has been penned as a self-help manual for needy parents rather than as a story to entertain small kids," the Sunday Times arts editor Alex O'Connell wrote, criticizing Markle for including "a therapy couch" for adults at the center of the book.

"It lacks the crucial ingredients for a successful tale for this age group: a good story and basic rhythm," she added.

Look, it's still going to sell, but it doesn't negate the fact that these two are annoying and astonishingly spoiled. I wish I could just live off $10 million and occupy a nice mansion in California like these two did when they ditched the Royals.

Last spring, Meghan dropped the bombshell that she knew would get the media's attention: racism. She alleges that there was talk about her newborn son's skin color. Even Tucker Carlson had to do a special commentary on this where he eviscerated the couple. The most powerful people are acting powerless. There are so many aspects to this tale that are simply not believable, like Meghan not searching who Prince Harry was and what institution he represented. But we should feel bad because the family was allegedly mean, and she couldn't speak out or something. She said all of this…to Oprah. They're already rich. They're going to make more money through various media deals. It's all settled and done. These two are banking millions, and they're playing the victim. I wish I had millions of dollars, talked to Oprah, and pretended to be muzzled.

You must be very bored, very stupid, and very narcissistic to think this will earn empathy from those who have had it much worse during COVID. People have lost their jobs, their loved ones, and in some cases, their mental health. A lot of people also died from COVID, but poor Meghan for being reportedly treated so badly that…she can abscond to California with millions of dollars and run the media gambit.

What a detached coupled we have here.