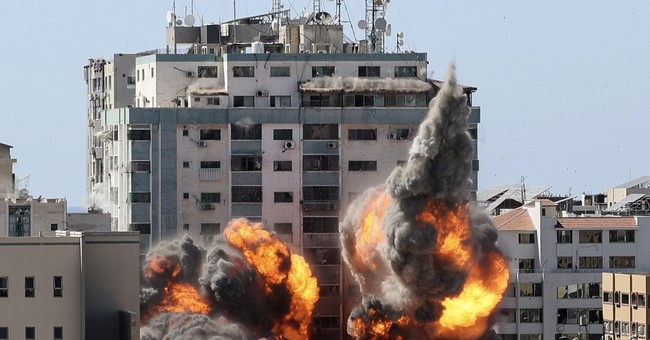 It always comes in threes. At CNN, they had a photo editor who was peddling anti-Semitic trash. There was another freelance contributor who was open about being pro-Hitler. What is it with these organizations that hire folks that will undoubtedly land them in trouble? I don’t work in human resources, but I’m sure that a full-blown Nazi is not someone you want to hire. With social media, this stuff is out there. It’s perused. And yet, these liberal outlets still get caught hiring anti-Semitic clowns. The New York Times is a den for that now, which led to the resignation of Bari Weiss, who is a liberal. She’s just not a communist like the rest of the reporting corps. And we wonder why the coverage of the Israel-Palestinian conflict reads like a Hamas pamphlet.

The Associated Press almost got into trouble with their new hire, but they cut ties before she even posted anything (via Washington Free Beacon):

The Associated Press's latest hire is an anti-Israel activist who accused Israel of "ethnic cleansing," called the late Jewish donor Sheldon Adelson a "naked mole rat," and helped organize protests against Jewish students traveling to Israel on the Birthright program.

Emily Wilder, who previously worked for the Arizona Republic, announced on Twitter that she would join the AP this month as a news associate, according to a screenshot of her tweet posted by the Stanford College Republicans. Wilder has since set her Twitter account to private. It's unclear whether Wilder will cover the Middle East.

The hire could fuel concerns about the AP's objectivity amid revelations that the news outlet shared an office building with Hamas military intelligence in Gaza. The headquarters was demolished in a targeted Israeli airstrike on Saturday.

Before joining the AP, Wilder co-led the Students for Justice in Palestine group at Stanford University, where she hosted a 2019 speech by cartoonist Eli Valley, whose anti-Israel drawings often depict Nazi imagery and offensive caricatures of Jews. The speech drew national attention after Wilder's group papered over posters from a Republican student group with Valley cartoons that were criticized as "largely indistinguishable from classic Nazi Jew-hatred."

Wilder also helped lead a 2017 protest outside the Taglit-Birthright office in New York, calling for a boycott of the donor-funded program, which provides free and low-cost trips to Israel for young American Jews.

Some in the liberal media lamented Wilder’s firing, noting that she’s Jewish. And? Donald Trump has a Jewish son-in-law, Jared Kushner, who he trusted to the hilt and was his top adviser, and yet he was still accused of anti-Semitism because…that’s what liberals when they can’t get over an election result; they just hurl word salad

Amazing how quickly a talented young reporter's career can be snuffed out by a Twitter mob that decided to feign outrage over some college tweets. And if @vv1lder somehow violated @AP's social-media rules, the solution is to offer guidance, not termination, to a new reporter. pic.twitter.com/PuGAwN0Aot

Spoke with @vv1lder, who was fired by the AP over college pro-Palestine activism and social media posts

She says an editor said earlier in the week she would NOT get in any trouble, and the AP refused to specify which posts violated social media policyhttps://t.co/PZB0fLMXaO

Solidarity with @vv1lder. ??? I hope she finds a publication that is more supportive of her principles and talent.

Do they not realize that both Emily Wilder and Eli Valley are Jewish?

"Wilder led an effort on Stanford’s campus to host antisemitic cartoonist Eli Valley. Valley frequently draws Jews in an offensive way and has depicted Nazi imagery in his work."https://t.co/sOL6HskqsO

Yeah, not going to lose any sleep over this. Hamas is a terrorist organization trying to kill innocent Israelis. We stand with Israel. Period. There are no two equal sides here. one is a nation while the other is a barbarian horde of terrorist killers. Hamas deserves to be wiped off the face of the Earth and I do look forward to that day.