This Is How Iran Just Trashed Another Obama Foreign Policy Initiative 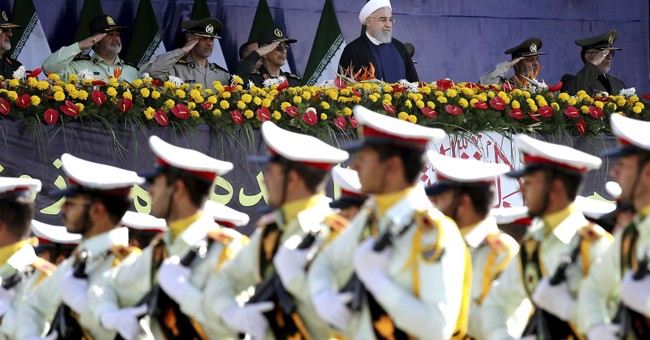 Well, this is only news in the sense that Iran now has officially declared that they will no longer comply with some of the provisions in the coveted international nuclear agreement that was touted by the Obama administration. It was a trash agreement. It always was—and it didn’t prevent the nation from acquiring nuclear weapons. On the contrary, once the deal expired in 10-15 years, the country could get back on track to obtaining nuclear arms. This was even admitted as fact by former President Barack Obama. All this agreement did was give Barry time to avoid bombing the country or taking any military action that would cripple their nuclear ambitions. Even after the agreement was signed, German intelligence was quite clear that Iran still pursued banned missile and nuclear components. Guy has been tracking this whole saga from the negotiation table to the Trump administration’s decision to withdraw from the agreement. It seemed pretty clear from the get-go that Iran was not going to keep its end of the bargain. Gee—a state-sponsor of terror not complying fully with an international agreement? I’m shocked (via NYT) [emphasis mine]:

Iran’s president declared on Wednesday that the country would stop complying with two of its commitments under the Iranian nuclear deal, pushing the growing confrontation between Washington and Tehran into new and potentially dangerous territory.

The announcement by President Hassan Rouhani came exactly a year after President Trump withdrew entirely from the 2015 agreement, which limited Iran’s capacity to produce nuclear fuel for 15 years.

But Mr. Rouhani did not follow Mr. Trump’s path and renounce the entire agreement. Instead, he notified European nations that he was taking some carefully calibrated steps, and that he would give Europe 60 days to choose between following Mr. Trump or saving the deal by engaging in oil trade with Iran in violation of American unilateral sanctions.

“The path we have chosen today is not the path of war, it is the path of diplomacy,” he said in a nationally broadcast speech. “But diplomacy with a new language and a new logic.”

Starting on Wednesday, he said, Iran would begin to build up its stockpiles of low enriched uranium and of heavy water, which is used in nuclear reactors — including a reactor that could give Iran a source of bomb-grade plutonium. If the Europeans fail to compensate for the unilateral American sanctions, he said, Iran will resume construction of the Arak nuclear reactor, a facility that was shut down, and its key components dismantled, under the deal.

Oh, and the Times spun this by adding, “None of those actions would get Iran to a weapon anytime soon. But they would resume a slow, steady march that the 2015 agreement temporarily stopped.” Uh, Iran just said they’re restarting their initiative to manufacture nuclear weapons. Okay—maybe that goal never really stopped, even under Obama’s failed Iran deal, but it’s not good. Fast or slow, a state-sponsor of terror, that the Obama White House thought they could negotiate with, is back to trying to build nuclear weapons. Watch this also be spun as Trump’s fault. It’s not. Trump was right to…nuke the whole agreement. I’ll let Guy explain why:

By Obama's own admission, the Iran nuclear agreement clears the way for the regime to achieve threshold nuclear-armed status.  The pact's key Western-imposed restrictions automatically expire after a period of 10-15 years, over which time period Iran is explicitly permitted to enrich uranium, utilize advanced centrifuges, and continue key research and development activities.  The regime's nuclear program was not dismantled by any stretch of the imagination under the accord; it was, at best, partially and temporarily mothballed.

New evidence illustrates and demonstrates the depths of Iranian deceit.  Part of the deal was that Tehran had to be 100 percent transparent about its nuclear history, owning up to the full extent of its previous activities on that front.  Doing so was a mandatory prerequisite prior to implementation.   Rather than acting in good faith and admitting their prior pursuit of nuclear weapons, Iran lied -- repeatedly -- while secretly hiding its vast trove of nuclear know-how, specifically cataloged for the purpose of developing nuclear weapons in the future.  The idea, it seems, was to dupe the West into offering all sorts of goodies along the way, only to dust off their nuclear research when the coast was relatively clear.  Almost everyone suspected that Iran was lying about its previous activities, but Israel'srecent intelligence bonanza proves it beyond a shadow of a doubt.

A final, important point on the legality and legitimacy of Trump's unilateral action…

Many of us argued precisely this point during the political fight over the Iran deal, but it fell on deaf ears.  Obama and John Kerry were dead set on a legacy "achievement," and nothing was going to stand in their way. When push came to shove, Congress was reduced to casting a symbolic vote against the accord.  More than 60 percent of all Senators and Representatives voted in opposition to the plan (327 out of 535 voting members), including dozens of House Democrats and a number of high-ranking upper chamber Democrats.  Even in an era of pitched partisanship, the likes of Chuck Schumer and Bob Menendez and Ben Cardin could not bring themselves to endorse a reckless nuclear giveaway engineered by their own party's president.

Yeah, this nuclear deal was total garbage; even Chuck Schumer knew it. It was just a stopgap for avoiding a military decision on Iran because Obama’s foreign policy was a dithering, over-analyzed, and feckless mess. One that Trump now is in the process of fixing.