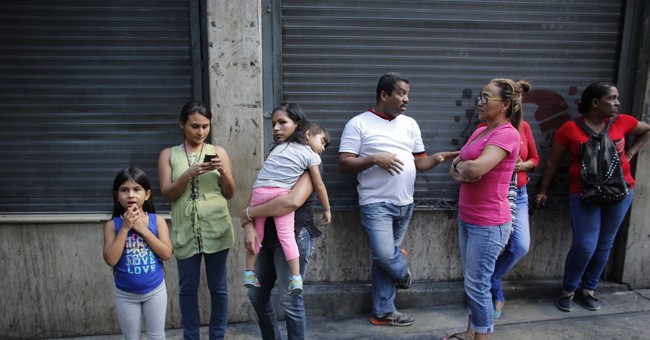 We’ve written how Venezuela is a socialist hellhole. The people are starving. It’s got to the point where people were eating out of garbage cans and breaking into zoos for meat. Pets are being eaten. Children are resorting to prostitution for food. Medical supplies are dangerously low. It’s to the point where a couple of years ago, there were reports that hospitals were operating under 19th-century conditions. Of course, looting is rampant, crime is up, and to prevent the appearance of the country falling apart, there’s a new food police unit: it’s illegal to wait in line for the supermarket to open. With the country in an economic spiral downward, inflation has gone through the roof. The nation is a mess. You already know this. To add to the misery, families can no longer afford to bury their loved ones in caskets. They’re rented, returned, and the bodies are buried in plastic bags (via Fox News):

As the crisis in Venezuela's socialist dictatorship deepens – gripped by mass hunger, starvation and a lack of medical supplies - there is no comfort even for the dead.

“What is happening is medieval. People are ‘renting’ caskets for a service, but giving them back. The same casket is being used over and over again because people cannot afford to buy one,” Venezuelan opposition leader Julio Borges, who has been living in exile in the Colombian capital of Bogota for the past nine months, told Fox News. “And then they have to wrap the body in plastic bags for the burial. Others don’t have money for a land plot, so they are burying loved ones in their back garden.”

One Venezuelan, who asked his name not be published, described the sudden death of his father in the capital Caracas last week, which left the family without a vehicle to take the body to the morgue. It took more than a day for the body to be collected.

And even then, the family had to say their goodbyes – they had no money for a funeral, or burial – praying the body would be disposed of in some kind of mass cremation.

For every day a body remains in the morgue, the cost rises, leaving families without the means for collection. In such cases, loved ones are simply left stranded – their relatives in mourning, not knowing what to do, and without closure.