With Socialism Failing To Provide, Venezuelans Resort To Looting In Order To Survive 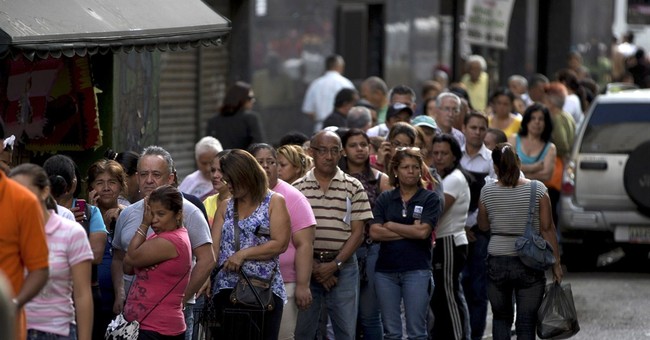 We all know how Venezuela’s 21st Century Socialism has devolved into a total nightmare. The drop in the price of oil has cost the country billions in projected revenue, which is needed to keep its various left wing policies afloat. Right now, there is a lack of access to television, long distance phone service, and even basic needs like toilet paper. The government owes hundreds of millions of dollars to companies who deal with telecommunications with foreign firms. To make matters worse, the country is experiencing rolling blackouts due to energy shortages. What’s the third wave of this misery brought on by leftist economic policy? Looting. The people are starving, and supermarkets aren’t being stocked regularly. This has lead to widespread discontent and violence. With government failing to provide, the people are beginning to steal in order to survive (via PanAm Post):

On April 26, people took to the streets in three Venezuelan states, looting stores to find food.

Maracaibo, in the western state of Zulia, is the epicenter of thefts: on Tuesday alone, Venezuelans raided pharmacies, shopping malls, supermarkets, and even trucks with food in seven different areas of the city.

Although at least nine people were arrested, and 2,000 security officers were deployed in the state, Zulia’s Secretary of Government Giovanny Villalobos asked citizens not to leave their homes. “There are violent people out there that can harm you,” he warned.

In Caracas, the Venezuelan capital, citizens reported looting in at least three areas of the city. Twitter users reported that thefts occurred throughout the night in the industrial zone of La California, Campo Rico, and Buena Vista.

They assured that several locals were robbed and that there were people on the street shouting “we are hungry!”

Supermarkets employees from Valencia told the PanAm Post that besides no longer receiving the same amount of food as before, they must deal with angry Venezuelans who come to the stores only to find out there’s little to buy.

Purchases in supermarkets are rationed through a fingerprint system that does not allow Venezuelans to acquire the same regulated food for two weeks.

Due to the country’s mangled economy, millions must stand in long lines for hours just to purchase basic products, which many resell for extra income as the country’s minimum wage is far from enough to cover a family’s needs.