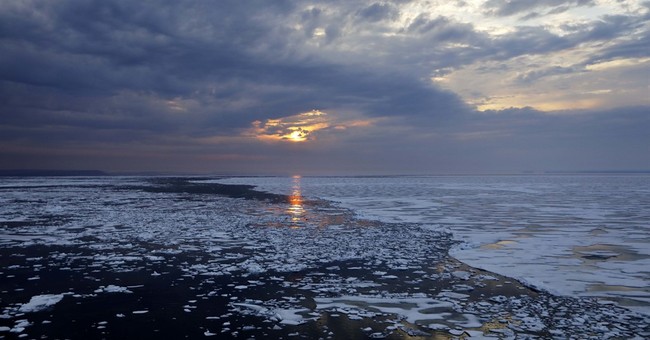 A major climate change report has been corrected, as two scientists found a glaring error in an ocean-warming report. The original report was alarming; oceans are warming at a rate 60 percent higher than what was first reported by a United Nations panel. The world is ending, folks. It’s The Day After Tomorrow, except that it’s not. The oceans aren’t warming at that rate. In fact, the range is so great that experts can no longer stand by their original statistic. They “muffed” the error margins. A mathematician caught the error and cooled the temperatures of this survey (via NRO):

The paper, published October 31 in the scientific journal Nature, suggested ocean temperatures have risen roughly 60 percent higher than estimated by the UN Intergovernmental Panel on Climate Change (IPCC). But, after errors in the authors’ methodology were identified, they realized their findings were roughly in line with those of the IPPC, after all.

The researchers’ alarming findings were uncritically reported by numerous mainstream-media outlets but Nic Lewis, a mathematician and popular critic of the consensus on man-made climate change, quickly identified errors.

Ralph Keeling, a climate scientist at the Scripps Institution of Oceanography who co-authored the paper, said he and his partner, Laure Resplandy of Princeton, quickly realized the implications of their mistake once Lewis pointed it out.

After correcting their mistake, Keeling said their research indicates oceans are warming only slightly faster than previously thought, not dramatically faster as they initially reported. Keeling said the miscalculation was made when they were calculating their margin of error, which had a larger range (10 to 70 percent) than they initially believed.

“Our error margins are too big now to really weigh in on the precise amount of warming that’s going on in the ocean,” Keeling said. “We really muffed the error margins.”

This isn’t the first time climate scientists have been dead wrong about the perceived odious nature of so-called global warming. For starters, in 2007, they predicted the Arctic ice cap would be gone by 2013, but it has grown by 533,000 square miles. Yes, we’ve had a wild hurricane season, but in 2013, it was the calmest one in three decades. Global warming is supposedly creating more wild weather, which so happens to coincide with seasons in which…wild weather occurs, like hurricane season.  In that same year, it was the quietest tornado season in 60 years. Maybe, and this is just a thought, that the science isn’t settled, because there really is no such thing as settled science. It changes. And we shouldn’t be pushing nations to cannibalize their economic growth, kill jobs, and reduce everyone’s standard of living based on liberal histrionics that were just gutted by a math error.