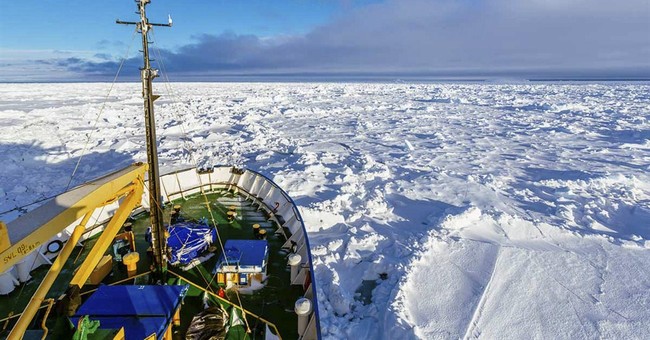 So, sea ice is more “resilient” that scientists originally assumed, according to the Wall Street Journal. In fact, a “single cool summer” actually stopped the ice cap around the North Pole from melting:

Using new satellite data, researchers at University College London reported in Nature Geoscience on Monday that the total volume of sea ice in the Northern Hemisphere was well above average in the autumn of 2013, traditionally the end of the annual melt season, after an unusually cool summer when temperatures dropped to levels not seen since the 1990s.

“We now know it can recover by a significant amount if the melting season is cut short,” said the study’s lead author Rachel Tilling, a researcher who studies satellite observations of the Arctic. “The sea ice might be a little more resilient than we thought.”

A steady decline in the extent of Arctic sea ice since the late 1970s has been taken as a barometer of longer-term warming trends in the Northern hemisphere. The U.S. Navy last year predicted that by 2030 the Arctic’s northern sea route could be ice-free and navigable for nine weeks every year.

Miss Tilling and her colleagues used new data from the European Space Agency’s Cryosat-2 radar satellite, launched in 2010. For the first time, they measured changes in the overall volume of seasonal sea ice across the Arctic and Greenland. Until now, researchers have been able to track the extent of ice, but not its thickness.

In 2013, summer temperatures were about 5% cooler than the previous year and the volume of autumn ice jumped 41%, they said.

Now, the Journal reported that sea ice levels are at its lowest before measurements began, but let’s elaborate on this a bit.

Scientists predicted the Arctic Ice Cap would be gone by 2013 as well. By the time 2013 came around, it had grown by 533,000 square miles. That year we also saw the creation of 19,000 Manhattan-size islands worth of sea ice, the quietest tornado season in six decades, and the calmest hurricane season in three decades*. Our air quality is also better than ever, according to the EPA.

To the south, the sea ice conditions in Antarctica have made the journey for the resupply vessels keeping the various research stations sustained more difficult. Heck, the CIA even shut down their climate research program.

Recently, the CCGS Amundsen, an icebreaker that acts as a research vessel, which conducts experiments 24-hours a day, had its 115-day expedition altered when it was ordered to help out resupply ships en route to Northern Quebec due to the amount of ice in their shipping lanes.

So, scientists were wrong about the resilience of sea ice, they were wrong about global cooling in the 1970s, and they could be wrong about rising global temperatures that seemed to have plateaued almost two decades ago, according to the UK Metrological Office.

Oh, and those new EPA regulations that are aimed at combating this phantom threat are going to do little; EPA Administrator Gina McCarthy seems to have admitted to it.