Butcher's Bill: With McCaskill Gone, Red State Democrats Have Been Virtually Wiped Out 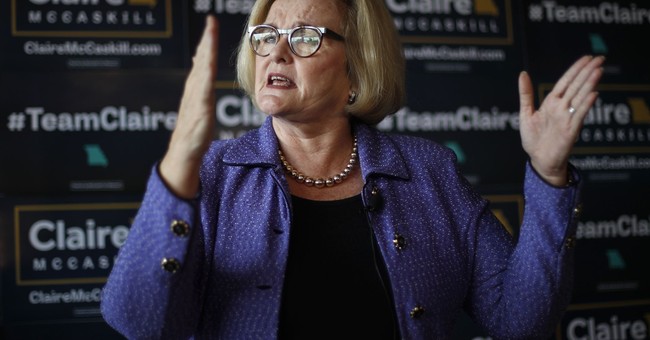 The Democrats tried to clip Judge Brett Kavanaugh, President Trump’s Supreme Court nominee, this fall, but revenge has been swift and sweet. So far, every red state Democrat who voted against Kavanaugh has lost—and now we can say that Sen. Claire McCaskill (D-MO) can join that club.

The Missouri Democrat should have been knocked off in 2012, but her opponent, Todd Akin, decided to step on a rake with an appalling and immensely stupid comment about rape and pregnancy. With 66 percent reporting, Republican Josh Hawley is trouncing McCaskill by ten points, 53/43.

The Fox News Decision Desk can now project that Republican Attorney General Josh Hawley will oust two-term Democratic Senator Claire McCaskill in one of the most closely watched races in the country. pic.twitter.com/TaWK5PE3xM

The red state butcher’s bill was extensive. Joe Donnelly in Indiana and Heidi Heitkamp in North Dakota are gone. And it looks like Bill Nelson in Florida won’t survive either. If Martha McSally and Dean Heller can hold Arizona and Nevada for Republicans respectively, along with Rep. Marsha Blackburn holding Tennessee, which she did, the GOP would have a solid 55-seat majority heading into the new Congress. Heading into the 2018 elections, Sen. Cory Gardner (R-CO), the chair of the Senate National Republican Senatorial Committee, was confident that the GOP could secure 55 seats. Cheers, Senator.

It seems Sens. Joe Manchin (D-WV) and Jon Tester (D-MT), as of now, are the only survivors.